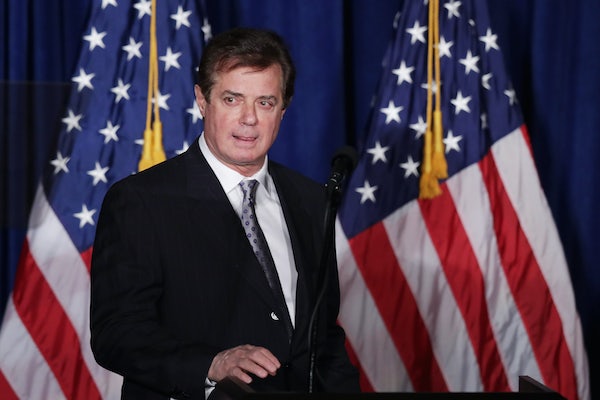 Reuters is reporting that the details of a recently unsealed search warrant application show that  Manafort, who worked as campaign manager for Donald Trump in 2016, was heavily in debt to a Putin-affiliated plutocrat. “In an affidavit attached to the July 2017 application, an FBI agent said he had reviewed tax returns for a company controlled by Manafort and his wife that showed a $10 million loan from a Russian lender identified as Oleg Deripaska,” Reuters notes.

The new documents underscore the fact that Special Counsel Robert Mueller clearly remains very interested in Manaforts ties to the Russian government and possible collusion, rather than the simple money laundering and obstruction of justice charges which make up the visible side of the government’s case against Manafort. A closer reading of the affidavit reveals that it also mentions another Russian oligarch, whose name has been redacted, who Manafort tried did business with. The affidavit also indicates an interest in Manafort’s ties to Rinat Akhmetov, an oligarch active in Ukrainian politics and Aras Agalarov, the wealthy Russian who is also close to Putin and who Donald Trump cultivated ties with in a 2013 trip to Moscow. Agalarov’s son Amir, a pop star in Russia, helped orchestrate the June 2016 meeting at Trump Tower between campaign officials and Russians with Kremlin connections. Amir (as he is known) recently released a music video where an actor pretending to be Trump engages in sexual escapades in Moscow.

As Reuters notes, “The search warrant application also confirmed that Mueller has been investigating Manafort’s role in a June 9, 2016, meeting that he attended at the Trump Tower in New York between Donald Trump Jr. and a Russian lawyer and self-professed Kremlin informant who purportedly was carrying damaging information on Hillary Clinton, the Democratic nominee for president.”

All of this confirms that despite President Donald Trump’s frequent cries of “no collusion,” Robert Mueller remains very much interested in the possibility that there was collusion.