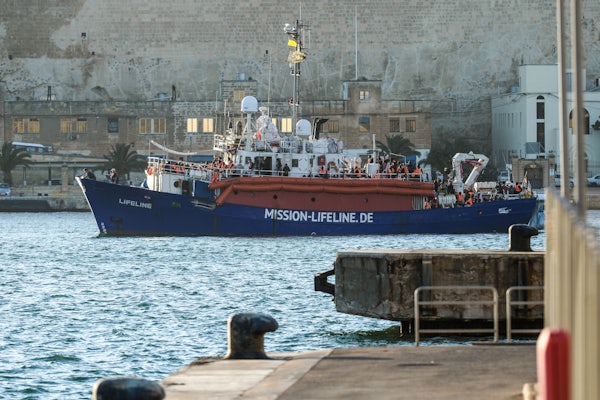 Merkel calls for the EU to cooperate on migration—which is way down.

Chancellor Angela Merkel told Germany’s parliament on Thursday that she’s seeking to broker a deal with the European Union in order to control irregular migration. During her speech, she declared that the migration issue could “make or break” the EU, which she said needs a tough yet human asylum and migration policy.  Interior Minster Horst Seehofer, meanwhile, gave the chancellor until the weekend to come up with a deal, or else he’ll begin turning migrants away from the Bavarian border.

European Union leaders have been facing pressure ever since Italy began closing its ports to charity-run rescue boats—and, more recently, ignored SOS calls from stranded boats at the command of Interior Minister Matteo Salvini. A rescue boat run by German charity Mission Lifeline, denied access to Italian and Maltese ports for almost a week, was only allowed to dock in Malta yesterday after eight European countries pledged to take the migrants on board.

As The New York Times pointed out this week, the renewed focus on migration is something of a paradox: numerically, the “crisis,” as it was dubbed in 2015, seems to be over. The number of undocumented migrants arriving in Europe has sharply decreased—Lampedusa, once a buzzing entryway to Italy for Libyan migrants, has only received about 1,100 migrants this year so far compared to 21,000 in 2015. But far-right leaders such as Matteo Salvini, the new deputy prime minister of Italy, have reignited the debate with staunch anti-migrant initiatives.

EU leaders will convene at a European Council summit on Thursday and Friday in order to hash out an accord for satisfactory migration policies. Italy has already threatened to veto any policies that don’t provide the country with more support, and Salvini has noted that the country may review its contributions to the EU budget if its needs aren’t met.