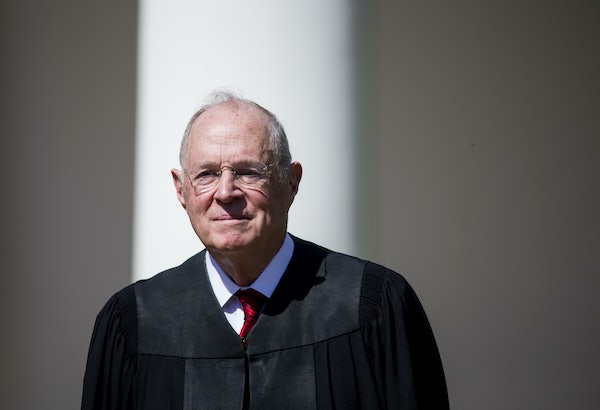 Donald Trump spoke those words to Supreme Court Justice Anthony Kennedy, shortly after ending his first speech to a joint session of Congress in February of 2017 according to a New York Times report that was published on Thursday evening. Trump was referring to Kennedy’s son, Justin, a banker who worked at Deutsche Bank for over a decade. Deutsche Bank was, notably, the only important financial institution that would work with Trump after his bankruptcies in the 1990s, lending him over $1 billion. Last year, the Financial Times reported that Kennedy’s son was “one of Mr Trump’s most trusted associates over a 12-year spell at Deutsche.” New York fined Deutsche Bank $425 million for its role in a Russian money laundering scheme in January of 2017. Kennedy announced that he was retiring after thirty years on the Supreme Court on Wednesday.

The connections between Kennedy and Trump, per the New York Times report are surprisingly deep, given the president’s general lack of DC experience—and Trump and his allies exploited them to perfection, encouraging the swing justice to retire before the 2018 midterms, which could return control of the Senate back to Democrats. Trump nominated Neal Gorsuch, a former Kennedy clerk, to replace Scalia shortly after assuming office. Ivanka Trump visited the Supreme Court a week before Kennedy’s retirement as the justice’s guest. Kennedy has, over the last two years, sided with the Trump administration in a number of narrow rulings.

Finance is, of course, deeply involved in every level of American government; the connections between Trump and Kennedy have been reported over the last two years. There is no reason to believe that Kennedy’s ties to Trump affected any of his votes. But as this new report details, these ties coincided with “a quiet campaign” to ensure Kennedy’s retirement and give Trump a chance to fill a spot on the Supreme Court.