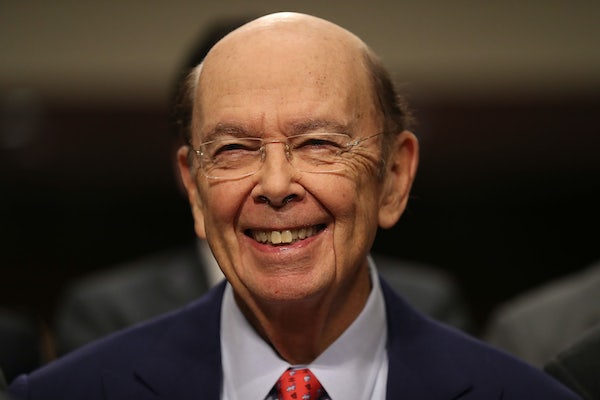 Last month, Forbes reported that Commerce Secretary Wilbur Ross’s claims that he had divested from a significant number of his holdings were a bunch of hooey—and that Ross, in a brazen move, attempted to profit off Forbes’s disclosure of his corruption by shorting the stock of a Russian shipping company he had a large stake in. That Ross still had significant investments in companies that are affected by his decisions as commerce secretary would be a scandal at any time, but it’s especially notable given that those holdings could be affected by the growing possibility of a Trump-led trade war.

On Monday evening, NBC News reported that Ross shorted two additional stocks while serving as commerce secretary, bringing the grand total to five. Ross has maintained that this is all a misunderstanding, and that his short positions were taken as a means of disposing of the stock—as he promised to do before he took office—and not to seek profit.

The secretary noted that he had been in the process of divesting himself of known stakes in the companies before becoming aware of the fact he had been awarded additional small stakes in each of the five firms as a benefit of having served on their boards of directors. Those shares were held in accounts he had been unaware of, he said.

Ross said the short sales in all five cases — which occurred during his tenure as Commerce secretary — zeroed out his stakes in the companies. After Ross covered the short positions, he realized no profit, or loss, on the trades, he said.

“These transactions are not profit-seeking short sales,” Ross told CNBC. “These shorts are technical ways of disposing the stocks.”

Ross said that all of the trades were approved, after he executed them, by the Commerce Department’s office of ethics and compliance.

But this is a very odd way to divest of stock—and it’s especially odd given that Ross’s means of “divestment” thus far has largely been to move his holdings into a trust, which is not really divestment at all. (Because the trust is not a blind trust, Ross would still be aware of his company’s investments.) Instead, Ross’s explanation only leads to more questions.