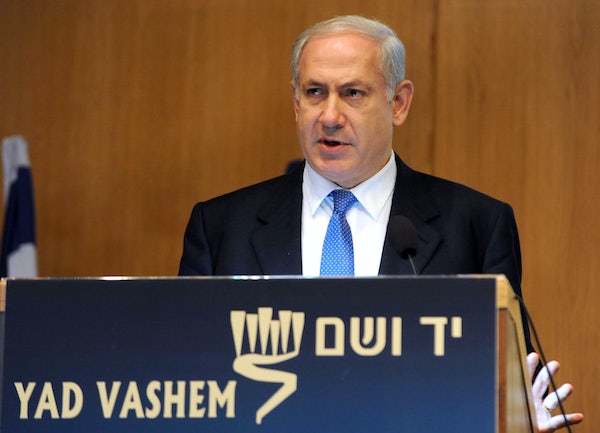 Israel’s prime minister faces a problem as his foreign policy goal of winning allies among East European nations is coming into tension with the need to be honest about the historical record. The government of Poland in particular has been pushing hard to minimize the involvement of Poles in the Holocaust.

Earlier this year, the Polish Senate passed a bill making any blaming of Poland for the Holocaust a crime. At the time, Netanyahu denounced the bill as “an attempt to rewrite history.”

Under pressure, the Polish government has softened that law, removing criminal penalties. Netanyahu claimed this shift as a victory and signed a joint statement with Polish Prime Minister Mateusz Morawiecki.

“We reject the actions aimed at blaming Poland or the Polish nation as a whole for the atrocities committed by the Nazis and their collaborators of different nations,” Netanyahu and Morawiecki asserted. “Unfortunately, the sad fact is that some people—regardless of their origin, religion or worldview—revealed their darkest side at that time.” Further, the joint declaration claimed, “Both governments vehemently condemn all forms of anti-Semitism and express their commitment to oppose any of its manifestations. Both governments also express their rejection of anti-Polonism and other negative national stereotypes.” Netanyahu and Morawiecki also praised the Polish government-in-exile and the Polish underground, saying they “attempted to stop this Nazi activity by trying to raise awareness among the Western allies of the systematic murder of the Polish Jews.”

The joint statement is, quite simply, bad history. It decontextualizes Polish collaboration from the nation’s own history and makes it a result of a few bad individuals. The equation of anti-Semitism with “anti-Polonism” is a travesty, given the genocidal nature of anti-Jewish ideology. And the record of the Polish government-in-exile and underground is much more complex and compromised than the statement allows.

Not surprisingly, the statement is producing a massive backlash in Israel. The Yad Vashem Holocaust Remembrance Center, the respected repository of historical memory on the Shoah, condemned Netanyahu in strong terms on Thursday, saying the joint declaration contained  “grave errors and deceptions.”

According to Yad Vashem, “Much of the Polish resistance in its various movements not only failed to help Jews, but was also not infrequently actively involved in persecuting them.” Historian Yehuda Bauer, professor of Holocaust Studies at the Hebrew University of Jerusalem, described the statement as “a betrayal” that “hurt the Jewish people and the memory of the Holocaust.”

Even Naftali Bennett, the Education Minister in Netanyahu’s government, condemns the joint statement. “I reject it completely—it has no factual or historical validity and will not be taught in Israeli schools,” Bennett tweeted.