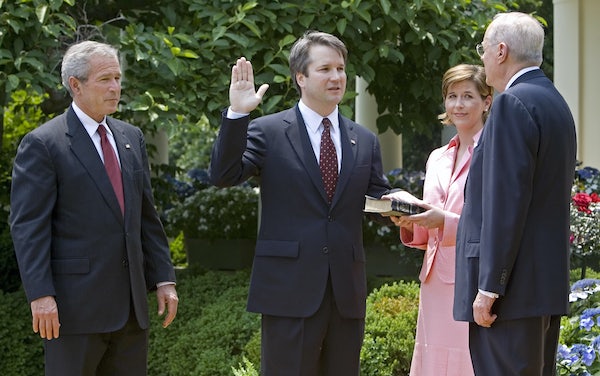 The president, as befits the former owner of the Miss Universe contest, is famously attentive to appearance. As the Washington Post noted in late 2016, his cabinet picks looked the part: “To lead the Pentagon, Trump chose a rugged combat general, whom he compares to a historic one. At the United Nations, his ambassador will be a poised and elegant Indian American with a compelling immigrant backstory. As secretary of state, Trump tapped a neophyte to international diplomacy, but one whose silvery hair and boardroom bearing project authority.”

When it comes to filling the vacant seat on the Supreme Court, the conservative Federalist Society has already created a short-list of potential Supreme Court Justices acceptable to the political right. President Trump may be able to focus on his area of speciality: image.

“Beyond the qualifications, what really matters is, does this nominee fit a central casting image for a Supreme Court nominee, as well as his or her spouse,” one Republican insider told Politico. “That’s a big deal. Do they fit the role?”

A picture of front-runner Brett Kavanaugh that has been circulating in Trump circles underscores how what matters to Trump is often very different from what matters to the Senate.

In the photo, Kavanaugh is being sworn in by Justice Kennedy to the United States Court of Appeals for the D.C. Circuit, while his wife, Ashley, dressed in a crisp, pale pink suit and pearls, holds the Bible under his hand and smiles.

“It looks all-American,” said one person, who noted that would be a plus in Trump’s book.

Aside from Kavanaugh, Trump’s final shortlist includes two other figures: Amy Coney Barrett and Raymond Kethledge. Of the three, Barrett seems the underdog since she reportedly had a poor interview with the president. Kethledge, on the other hand, as an outdoorsy and outgoing presence, hit it off with Trump.

It’s worth asking whether “all-American” isn’t just a code word for “white male.” New York magazine suggests “all-America” was “a not very subtle way of expressing why Amul Thapar, Mitch McConnell’s favorite candidate and the only minority on Trump’s list, didn’t make the final cut.” The problem with casting to fit the part is you’re only going to replicate the demographics of the existing social order. Although, for Trump, that might be a feature more than a bug.