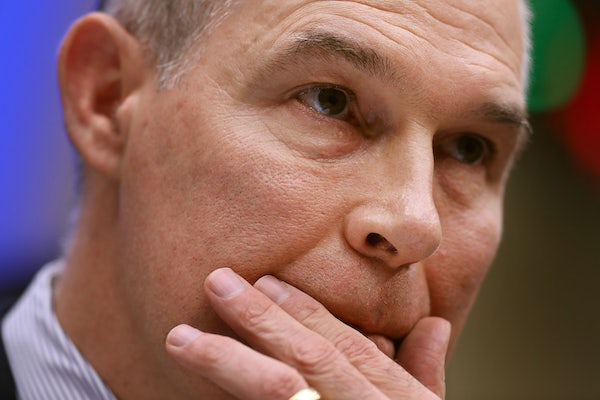 The embattled Environmental Protection Agency administrator probably wishes he never hired Kevin Chmielewski, who has been providing a steady stream of details about Pruitt’s unethical and wasteful behavior since he left the agency in February. And the former deputy chief of staff’s latest disclosure is a doozy, revealing potentially illegal behavior that could lead to felony charges against his former boss.

On Thursday, Democratic Congressmen Ted Lieu and Don Beyer send a letter to the EPA’s Inspector General Arthur Elkins, asking him to investigate whether Pruitt violated the Federal Records Act by keeping so-called “secret calendars.” Their request is based on Chmielewski’s July 2 interview with CNN, in which he said Pruitt would routinely “hide controversial meetings or calls with industry representatives and others” that might “look bad”—including a meeting with a former Vatican leader accused of sexual abuse. “Willful concealment or destruction of such records is a federal crime ranging from fines to imprisonment,” the congressmen’s letter to Elkins reads.

Lieu and Beyer’s request represents one of the more serious accusations against Pruitt, who is facing more than a dozen official investigations over his behavior at EPA. Environmental groups also accused Pruitt of breaking federal records laws in a lawsuit filed in February. Pruitt has denied the claims.

An EPA investigation alone wouldn’t be enough to sent Pruitt to prison, even if it found that Pruitt violated federal records laws. Elkins can only make recommendations to the Department of Justice, which would then choose whether to press charges based on Elkins’ findings. It seems unlikely that the Trump administration’s DOJ would choose to prosecute one of its own people. Especially when that person is vying to run the DOJ himself.