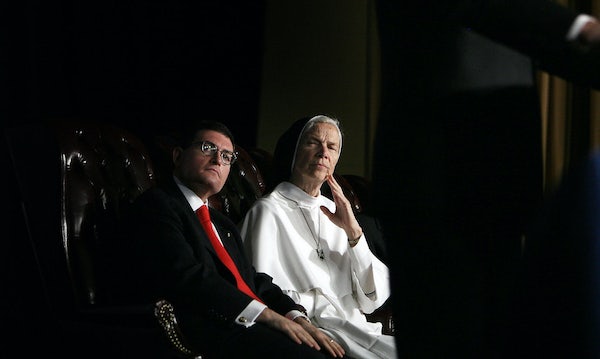 Why all the anti-Catholic conspiracy-mongering?

Daily Beast writer Jay Michaelson is worried about the outsized power Donald Trump’s advisor Leonard Leo will have on the Supreme Court pick and the broader American judiciary. This is a worthy topic for discussion, since Leo is in fact drawing up the shortlist for Supreme Court nominations and has been a key player in The Federalist Society, an organization which is the gatekeeper for Republican court nominations.

Unfortunately, Michaelson presents Leo’s actions through the prism of anti-Catholicism. Leo, we’re told,  is a “Catholic fundamentalist” who “belongs to the secretive, extremely conservative Knights of Malta, a Catholic order founded in the 12th century that functions as a quasi-independent sovereign nation with its own diplomatic corps (separate from the Vatican), United Nations status, and a tremendous amount of money and land.”

Tom Carter, a former associated of Leo’s, is quoted as saying, “Leonard is very good at staying in the shadows.” Leo, we’re informed, likes to go to mass every day.

Michaelson does include a proviso which both spells out and tries to ward off the conspiracy theories being evoked by his article. “To be sure, none of this is to repeat the odious claims of anti-Catholicism of papist conspiracies and dual loyalty,” Michaelson writes.

But the weight Michaelson gives to Leo’s Catholicism does, despite this disclaimer, replicates the anti-Catholic conspiracy theories of yore. It also significantly distorts the story of the conservative take-over of the courts.

American courts have been moving to the right since the 1970s, but that’s because of broad political push by the Republican Party, not just a small cabal of Catholics. To be sure, conservative Catholics are a part of that Republican coalition, but a much smaller part than white evangelical Protestants. The Federalist Society is a secular organization which includes people of many religious faiths, as well as agnostics and atheists. The main impulse of The Federalist Society is economic conservatism, which has little or nothing to do with Catholic teaching.

Many devout Catholics, including liberals and leftists, try to go to church everyday. Leo’s attempt to pack the court with rightists deserves criticism, but overemphasizing his Catholicism ignores the fact that he’s simply the spearhead of a larger social movement, of which conservative Catholics are a minority.