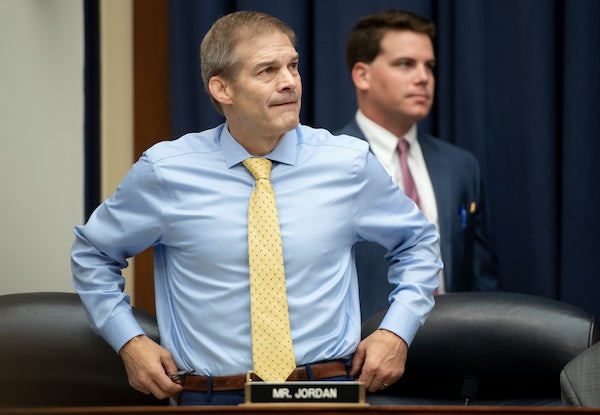 In a letter to colleagues on Thursday morning, the Republican congressman Jim Jordan announced he was running to become the next Speaker of the House of Representatives. Jordan’s bid is a bold move given that he’s been entangled in a scandal involving the late Dr. Richard Strauss, an Ohio State University medical doctor who is accused of abusing scores of athletes in his care. Several former Ohio State University students have alleged that they spoke of Strauss’s actions to Jordan, who worked as an assistant coach at the school from 1987-1995, and Jordan did nothing.

As CNN reports, “Jordan has repeatedly denied any knowledge of inappropriate behavior during his time as assistant wrestling coach at OSU and said Thursday that he does not believe the questions surrounding his time at OSU will affect his bid for speaker.”

”I’ve talked to all sorts of colleagues,” Jordan told CNN. “They can all see through that story.”

Jordan’s bid seems to rely on the assumption that the GOP either doesn’t believe the allegations against him or won’t care—a decent bet, going by recent history. If Jordan gets the speakership, it would follow the pattern of the party remaining loyal to Donald Trump, as well as many Republicans supporting the 2017 Senate campaign of Roy Moore, who is alleged to have molested a teenage girl.

Jordan’s own personal loyalty to Trump, as displayed in his support for a resolution to impeach Deputy Attorney General Rod Rosenstein, is likely to help him garner support. As FiveThirtyEight founder Nate Silver notes: