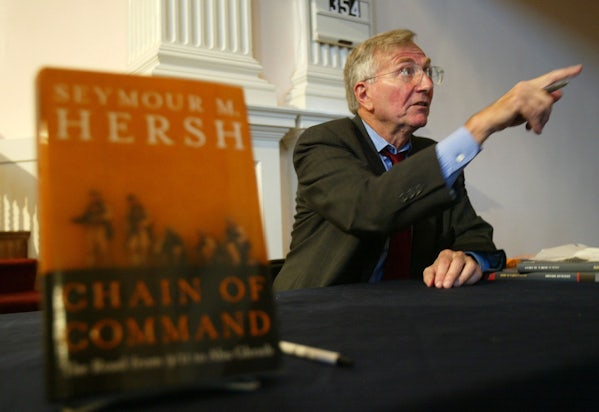 “I’m about to interview the 81-year-old doyenne of investigative journalism Seymour Hersh.” So begins a piece by Youssef El-Gingihy published yesterday on, then deleted from, The Independent’s website. That the word “doyenne” was used in reference to a man was not the British paper’s only issue with the story, presumably. As Tom Gara of BuzzFeed tweeted today, citing a cached version of the piece, the accomplished investigative reporter Seymour Hersh is quoted as suggesting that Osama bin Laden couldn’t have been the only brains behind the attack.

Did Hersh mean that the U.S. went after the Taliban for wobbly reasons, or something more dramatic? “The concept of perpetual war is not exactly unintentional,” El-Gingihy wrote cryptically, adding that “war is good for business.” The article contains further tantalizing tidbits, like Hersh’s theory that Syrian dictator Bashar al-Assad’s attacks on his people represent “as close to a just war” as they come.

Is this why the article was pulled? Or was there a more pedestrian reason? El-Gingihy claims that it was mistakenly published early, and will return online on Wednesday:

This is somewhat at odds with his earlier tweet promoting the piece:

As The New Republic reported last month, Hersh’s new autobiography itself contains more than a few eye-popping revelations—like his recollection that he knew that Richard Nixon hit his wife, Pat, but figured it was none of his business. Hersh has done important work in recent years, but if his quotes in The Independent are accurate, and not taken out of context, he may have some explaining to do.