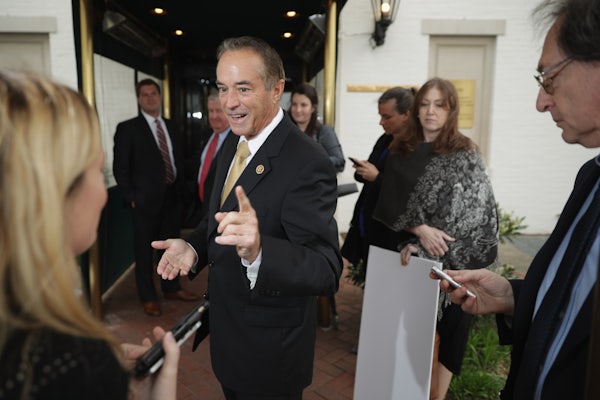 Trump’s earliest fan in Congress is in handcuffs.

The FBI reportedly has arrested Representative Chris Collins of Western New York, the president’s first congressional supporter, on Wednesday morning. The three-term Republican lawmaker is being charged with committing securities fraud, wire fraud, and lying to the FBI, according to an indictment filed by federal prosecutors.

Collins came under scrutiny last year by the Office of Congressional Ethics for his connections to Innate Immunotherapeutics, an Australian biotech company in which he invested more than $5 million, and for his efforts to persuade other potential investors to join him. Politico reported last year that Collins had bragged in the Speakers’ Lobby of the House of Representatives about “how many millionaires I’ve made in Buffalo the past few months.”

In a statement, Collins’s lawyers said, “It is notable that even the government does not allege that Congressman Collins traded a single share of Innate Therapeutics stock. We are confident he will be completely vindicated and exonerated.”

On the national stage, Collins made his name as the first elected official on Capitol Hill to endorse Trump, backing his presidential campaign in February 2016 at a time when large swaths of the Republican Party’s establishment still held their eventual nominee at arm’s length. “We need a chief executive, not a chief politician,” Collins, who represents suburban Buffalo and adjacent rural communities, said at the time. (Four days later, Jeff Sessions became the first senator to endorse Trump.)

That early support helped pluck Collins from obscurity, making him a more prominent figure in both the House caucus and on cable news. In May of 2016, Collins told RealClearPolitics that his colleagues on the Hill see him as “the Trump guy.” Earlier this year, former Republican Congressman Tom Reynolds, who once represented Collins’s district, told Politico, “There is no one, absolutely no one, in Congress who is more of a champion” for Trump.

Collins’s familiarity with the president could come in handy, if the FBI’s charges stick. Trump has a habit of doling out pardons as rewards to his political supporters.