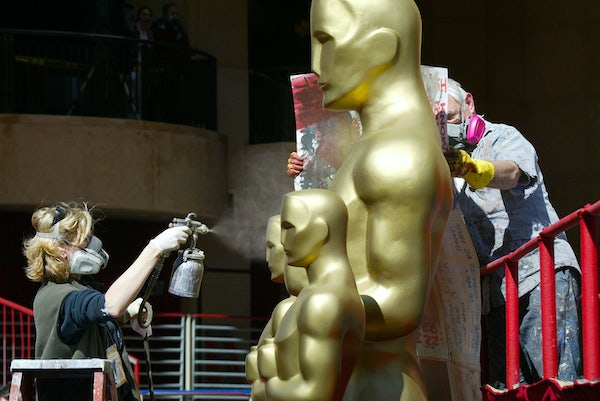 The Oscars introduce a new award for “popular” movies.

Although everybody knows that the Oscars are too long, all but the coldest heart warm to see the best sound mixers or costume designers get their moment in the sun. According to a letter from Academy CEO Dawn Hudson and President John Bailey to members, however, the awards show is going to be cut down to a strict three hours. Some “select categories,” the letter explains,” will be presented “in the Dolby Theatre, during commercial breaks (categories to be determined).” Those awards won’t be cut, exactly—they’ll just be edited down and shown later in the program.

Even worse (for film nerds), the letter also announced a new category: “outstanding achievement in popular film.” This will surely be a boon for ratings, since the most popular actors will be on the TV in their fancy outfits and the novelty of the award itself will draw people in. But its very name raises some existential questions for the industry, and how it rewards itself.

If the “best picture” is explicitly a different animal than the best “popular film,” then does that mean that the Academy of Motion Picture Arts and Sciences believes that popular movies are never the “best” ones? Does it mean that the greatest movie of the year is one that nobody actually likes? Is Hollywood’s most prestigious awards body pitting commercial against artistic success? The best picture award is usually the peak of each year’s ceremony, and this new category—along with all the questions it raises—will change everything.

These announcements come after a dismal 2018 ceremony—the least-viewed Academy Awards since records began. Academy members are movie nerds, so it must pain them to kill the live presentation of the technical stuff (for the technical stuff will be against the wall, I wager). I’m sure the big studios are happy about the blockbuster category. But Bailey and Hudson’s letter ended on a sad note. “We have heard from many of you about improvements needed to keep the Oscars and our Academy relevant in a changing world,” they wrote. “The Board of Governors took this charge seriously.”