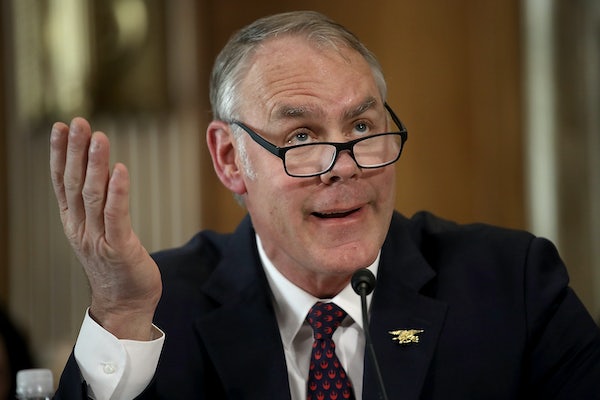 Ryan Zinke: There are too many trees in the forest.

After touring several neighborhoods ravaged by the Carr Fire on Sunday, the Interior secretary said large, healthy trees must be removed from national forests to prevent the spread of wildfire flames. “It doesn’t matter whether you believe or don’t believe in climate change,” Zinke said. “What is important is we manage our forests.” Zinke also blamed environmental groups for the state’s devastating wildfire season, saying their opposition to industrial logging operations has worsened the tree problem.

This is not a new argument, and it’s a hotly contested one. While America’s forests are overgrown—thus providing more fuel for flames to quickly spread—dead trees and underbrush are considered greater problems. California’s forests have more than 100 million dead trees. The U.S. Forest Service is supposed to help manage this, but historically has had to spend most of its $600 million budget on directly fighting fires. In March, Trump signed legislation to give the Forest Service an additional $2 billion to manage forests, but it doesn’t go into effect until 2020.

Last week, President Donald Trump blamed California’s wildfires on a lack of available water for firefighters. Firefighters and fire experts roundly agreed that there’s plenty of water to fight the 100+ blazes raging across the state; some pointed out that water isn’t even the main tool used to tame wildfires. This argument, like Zinke’s, is being made to advance a policy agenda. Trump has also long wanted to weaken environmental protections for endangered species, and is already using his water argument to do it. The administration is also considering loosening regulations that require the logging industry to protect the environment while cutting down trees.