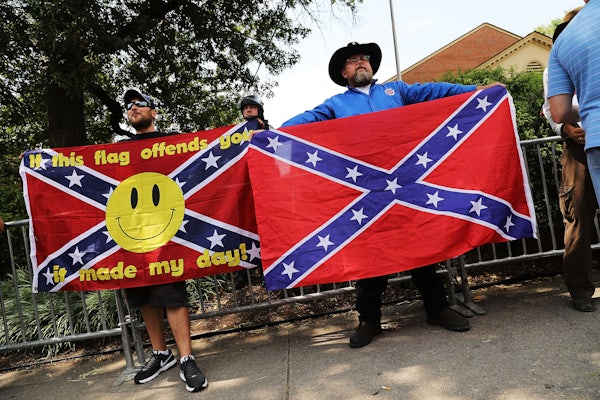 Politico is reporting that the The Claremont Institute, a California think tank notable for being a rare haven of intellectual support for President Donald Trump, is undergoing a divisive debate over white nationalism. The controversy began when former White House speechwriter Darren Beattie posted a message asking fellow conservatives for support. Beattie had been fired on Monday after it was revealed that he had given a speech at a conference with white nationalists.

Beattie’s email elicited a response from another Listserv member, Charles Johnson, a notorious alt-right troll. “Beattie’s offense is that he spoke at an event where — gasp! — there were white nationalists afoot!” Johnson wrote the Listserv. “Heaven forbid that some thinkers — like the American founders who favored our country be majority white — think that the U.S. of A should stay majority white! Perish the thought. Can’t have that.” The Politico article claims there were other “racially incendiary emails” but only Johnson is quoted.

Johnson’s comments reported provoked a heated debate and led The Claremont Institute to shut-down the Listserv in a little over an hour.

According to Politico, “The episode provides a window into the challenges facing the Trump-friendly right as it has struggled to build an intellectual movement that can outlast Trump — and to rid itself of bigots and fringe elements who have glommed on to some of the president’s immigration rhetoric.”

It is true that there is a larger pattern here, one that can be seen in white nationalists and racists running for office as Republicans, attending parties with high ranking White House officials, and having their ideas echoed by leading Republican candidates.

But the problem is so persistent that it can’t be seen simply as fringe individuals trying trying to jump on the Trump bandwagon. Rather, white nationalism is now clearly a part of the Republican base, one that the president himself tries to cater to through his rhetoric and tweets. Johnson himself is not marginal figure in The Claremont Institute but has been affiliated with the think tank. He has been a Publius Fellow at the Institute and a contributor to The Claremont Review of Books. Johnson wrote a book endorsed with a forward by Charles Kesler, a senior fellow at the think tank and one its leading intellectual lights. In other words, the Republican Party and conservative institutions can’t simply go around asking, with faux-naivety, “Why are all these white nationalists constantly showing up wherever we go?”