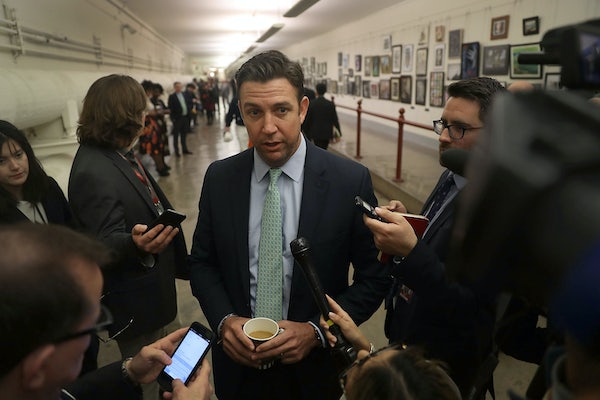 Congressman Duncan Hunter blames his corruption indictment on his wife.

Both Republican congressman Duncan Hunter and his wife Margaret Hunter are facing charges of misusing campaign funds. Appearing on Fox News on Thursday night, the lawmaker seemed to blame his spouse for his troubles.

“I’m saying when I went to Iraq in 2003, the first time, I gave her power of attorney and she handled my finances throughout my entire military career and that continued on when I got into Congress,” Hunter said. “Because I’m gone five days a week, I’m home for two.”

In the same interview, Hunter underscored the point. “And she was also the campaign manager,” the lawmaker claimed. “Whatever she did, that will be looked at too, I’m sure. But I didn’t do it. I didn’t spend any money illegally.”

It’s not clear that this line of argument will do him any good, since the indictment specifies that Hunter himself appointed his wife in the campaign manager’s position and kept her their even after he was warned about her spending. “Duncan Hunter installed Margaret Hunter as his paid Campaign Manager despite the protests of his Treasurer and with full knowledge of her long history of misuse of campaign funds, in part because as they discussed the Hunters ‘need[ed] the extra money’ that would come from her salary,” the indictment reads.