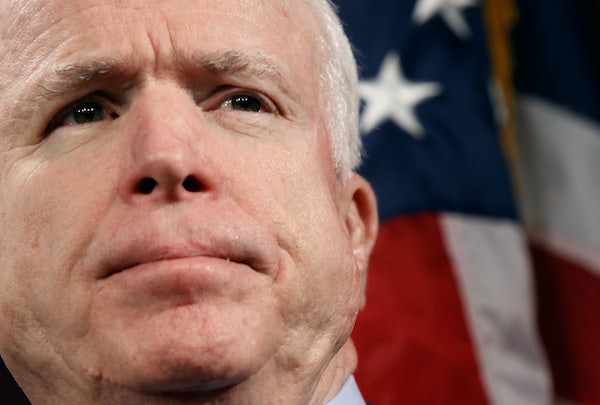 John McCain inspired many great stories in The New Republic.

The late John McCain provided great copy: he was colorful, provided easy access, and gave memorable feisty quotes. He was also at the center of many divisive American political battles, from the Vietnam War to Trumpism. Over the years, then, many writers naturally turned to the larger-than-life senator for their stories. Here are some highlights from our archives.

In December 1970 David Ifshin had led a group of American students to Hanoi, where he delivered an anti-war radio address to American soldiers engaged in attacks on North Vietnam. Like other anti-American propaganda, his program was piped into McCain’s prison cell from six in the morning until nine at night. But McCain, who can generate anger in a heartbeat, shows not the faintest trace of resentment. “Ifshin stood in my office,” he explains, “and he said, I came here to tell you that I made a mistake. I was wrong, and I’m sorry.’ And I said to him, Look, I accept your apology. We’ll be friends. But more importantly I want you to forget it. Go on with your life. You cannot look back.’”

In 1999, David Grann reflected on the problem of letting McCain’s personal heroism serve as a criterion for public office:

The trouble is that, in the wake of Clinton, character has become the only measure of a man. It has become a substitute for ideology, even though ideology and the programs that evolve from it may have farther-reaching implications and are certainly far easier to gauge. It is as if we decided to hire someone to deliver the mail based on the fact that he once saved a woman dying in the street, rather than on whether he ever delivered the mail on time. And it is after no digging at all that I discover what almost no one ever mentions about McCain: his voting record.

In 2000, Jonathan Chait speculated that McCain was coming unmoored from the Republican Party:

The most plausible way to explain McCain’s strange intellectual odyssey is to assume that something unmoored him from the discipline and dogma of his party. That something, almost certainly, was campaign finance reform. It is not hard to imagine how this happened: In the course of his reform crusade, McCain has been pilloried by Republicans and praised by Democrats and liberal journalists. Maybe he began to wonder who his friends were. Maybe the overwhelming GOP defense of a system McCain insists is corrupt made him rethink the faith he had placed in the people from whom he took his ideological cues. “I think the party to some degree has lost its way,” he told me, “and I think this is because of the influence of big money.”

In 2006, John Judis praised McCain’s ability to change his mind but noted the senator remained stubbornly committed to a hawkish foreign policy:

McCain wasn’t willing to concede that there was any flaw in the basic strategy of taking over and attempting to transform an Arab country highly sensitive to Western domination. I told McCain I thought that he failed to appreciate the power of nationalism, either in Vietnam or Iraq. “I hope I have a strong appreciation,” McCain replied. “I think it is fundamental. The Ukraine revolution--they had their revolution to divorce themselves from Russia. I think it was the same thing in Georgia. Nationalism was the first thing that caused the breakup of the Soviet Union. I hope I place sufficient emphasis on nationalism.” But McCain did not address longstanding Arab resistance to Western occupation--whatever the occupier’s expressed motives.

Fournier remembers intimate moments like watching McCain’s aides comb his hair and help him into a sweater—assistance the senator required after his Vietnam War injuries left him unable to raise his arms above his shoulders. “It just stuck me: Holy shit. This guy can’t comb his own hair,” Fournier said. “It doesn’t make him any better or worse to be a president, but boy, it was a compelling moment that for the rest of the campaign kept him human for me.” Fournier added, “McCain has been covered pretty fairly and pretty honestly by most reporters.”

The John McCain I came to know is a far more interesting, layered, complicated, farsighted, shrewd person than most of the portraits of him convey. And for all his unusual accessibility to the press and through them the public, a part of him remains impenetrable. A congenitally restless man, his clear preference was to keep moving, as if stopping to contemplate matters was something he wasn’t comfortable with. McCain reads books but he’s no deep intellectual; as a senator, which was when I knew him best, he’s been a man in motion, of action.