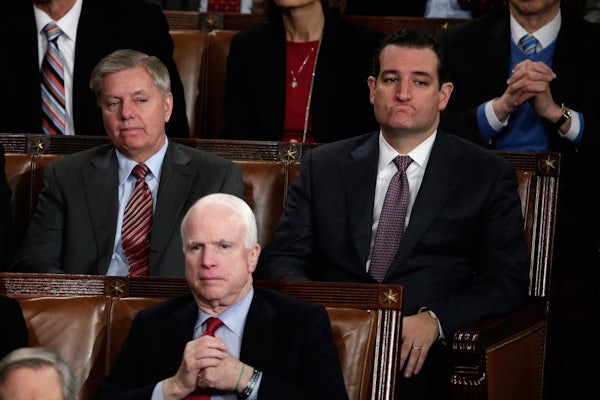 When it comes to honoring the late Republican senator, the two parties are playing against type. Senate Minority Leader Chuck Schumer has proposed rechristening the Russell Senate Office building (currently named after the late Democratic Senator Richard Russell) in honor of McCain. Russell, who died in 1971, was a Democrat. So far, though, most of the support for honoring McCain at Russell’s expense has come from Democrats, and most of the headwind against it from Republicans.

The debate is about Russell as much as McCain. One reason for changing the name of the building is that Russell was one of the foremost supporters of Jim Crow segregation, a powerful politician who used his considerable mastery of Senate rules to slow the pace of civil rights reform in the 1950s and 1960s.

“As one who was born and reared in the atmosphere of the Old South with six generations of my forebears now resting beneath Southern soil,” Russell once wrote, “I am willing to go as far and make as great a sacrifice to preserve and insure white supremacy in the social, economic, and political life of our state as any man who lives within her borders.” Russell’s niece Sally Russell said he was “a racist” but also said he had genuine accomplishments as a Democratic lawmaker that deserve to be honored.

But so far, the people who are most willing to defend Russell’s place in the historical pantheon are Republicans. “We’ve honored John McCain, but Richard Russell was an icon,” Republican Senator Richard Shelby of Alabama told The Washington Post. “I didn’t serve with him, but he was an icon in his day.”

That both parties are championing senators from across the aisle is no accident. Russell was a Democrat but he belonged to a region where most white voters have shifted from the Democrats to the Republicans. McCain was a Republican but his last political battle was against a president of his own party. Both Democrats and Republicans are trying to claim aspects of the other party’s history for themselves.