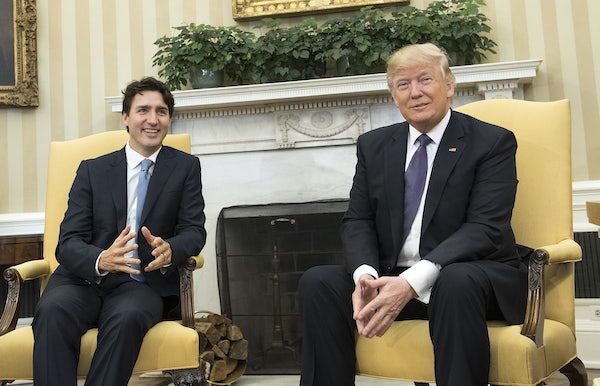 Canada scrambles to figure out a response to Trump’s NAFTA ultimatum.

Crowing over the deal he has made with Mexico, President Donald Trump has offered Canada take-it-or-leave-it offer: sign up on the new deal with Mexico and the United States by Friday or be shut out.

The Canadian government is taking the threat seriously. As The New York Times reports, Chrystia Freeland, Canada’s foreign minister, “cut short a trip to Europe to fly to Washington.” After a meeting with her American negotiating counterparts, Freeland acknowledged that “This is a really big deal” and said “We are encouraged by the progress that the U.S. and Mexico have made, particularly on cars and labor.”

Inside Canada itself there’s a disagreement over how imperative it is to abide by Trump’s artificial deadline, which is more an act of political showmanship than a timeline that absolutely has to be met.

As Globe News notes, “trade experts are dismissing the take-it-or-leave-it threat as political theatre aimed at pressuring Canada to acquiesce, with some even questioning whether the president has the legal authority to pursue a deal that doesn’t include Canada.”

It’s by no means clear that Trump even has the legal authority to shift NAFTA from a three-country deal to a two-country one. Global News explains: “At issue is the trade promotion authority Congress has granted Trump to fast-track renegotiation of the North American Free Trade Agreement. That authority was for a trilateral deal involving all three NAFTA partners, not a bilateral pact between just two of them.”

Still, even if Trump’s ultimatum is only political drama, it might be in Canada’s best interest to go along with it, in order to reassure investors that NAFTA is secure. The recourse of relying on American courts and the congress to slow down Trump’s actions might work legally but could come at a cost of creating uncertainty about Canadian/American relations. The choice Canada faces is between humoring Trump’s attention-grabbing ultimatum or sticking with the tactic of lobbying institutions outside the presidency.