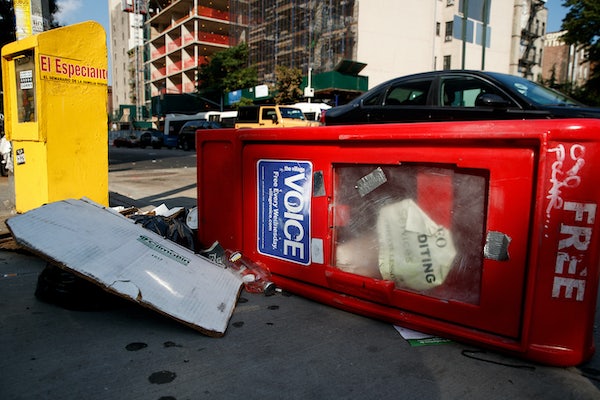 The Village Voice has ceased publication.

Gothamist is reporting that Peter Barbey, the owner of The Village Voice, told staff that the legendary alternative weekly will stop posting new stories. Barbery purchased the newspaper in 2015 and shut down the print publication in 2017. The owner is now intent on digitalizing back issues and selling the paper to a new owner.

“Today is kind of a sucky day,” Barbey told his employees. “I bought The Village Voice to save it; this isn’t exactly how I thought it was going to end up. I’m still trying to save The Village Voice.”

The Village Voice was established in 1955 by the novelist Norman Mailer and his friend Dan Wolf, neither of whom had a background in journalism. “If we had known more, we certainly would have suffered less,” Wolf once lamented. But this non-professionalism helped define the classic Voice of the 1950s and 1960s, where it became a leading advocate for counter-cultural values and a seedbed for the New Journalism. The paper was pivotal for Mailer’s own shift from being a fiction writer to engaged flaneur who provided highly subjective accounts of political conventions, anti-war protests, and boxing matches.

Yet Mailer’s idiosyncratic personal journalism was only one side of The Village Voice, Wayne Barrett, who started writing for the newspaper in 1973, was an old-fashioned muck-racker, skilled at digging into stories about urban corruption. For many years, Barrett was the bane of New York bigwigs like Ed Koch, Rudy Giuliani, and Donald Trump.