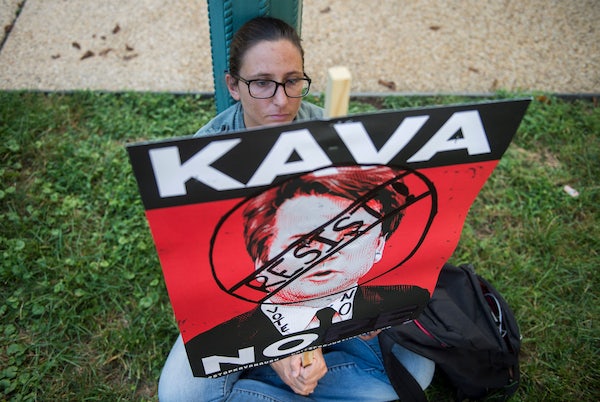 Brett Kavanaugh has created a media persona that fails to convince.

On Monday, Brett Kavanaugh and his wife, Ashley, appeared on Fox News to deny the accusations of sexual assault leveled against the jurist during his Supreme Court nomination. “It is unheard of for a Supreme Court nominee to give interviews during the confirmation process,” Robert Barnes of The Washington Post observed. Even more groundbreaking was the seeming frankness of Kavanaugh’s comments about his personal life, such as his comments that he had been a virgin in high school, college, and “many years later.” It’s perhaps fitting that a reality-show president has nominated to the Supreme Court someone willing to do a television tell-all. The entire Kavanaugh nomination process, including large protests at Yale (his former college), has become an enormous media extravaganza, a polarizing culture-war spectacle of the type that has become the dominant political style of the Trump era.

There have been controversial Supreme Court nominations before, notably the failed bid of Robert Bork in 1987 and Clarence Thomas’s successful bid in 1991. The Thomas hearings had the added incendiary element of alleged racism, with the jurist claiming he was the victim of “a high-tech lynching for uppity blacks” when he was accused of sexual harassment by Anita Hill, a former co-worker. Still, the Thomas hearings took place before social media made rumors and leaks so easy to spread and before the #MeToo movement made allegations of sexual harassment a central part of political debate. By every measure, the Kavanaugh hearings are much more contentious and disruptive of settled norms.

Trump has praised Kavanaugh for looking like he came from “central casting” (a common criteria the president uses in evaluating nominees). This phrase suggests that Kavanaugh is playing a role, a suspicion the Fox News interview did little to allay.

For the hard-to-deny truth is that Kavanaugh was creating a character when he described his younger self, that of a studious young Catholic who enjoyed the occasional drink.

“I was focused on academics and athletics, going to church every Sunday at Little Flower, working on my service projects, and friendship, friendship with my fellow classmates and friendship with girls from the local all girls Catholic schools,” Kavanaugh says of his teenage self. “And yes, there were parties. And the drinking age was 18, and yes, the seniors were legal and had beer there. And yes, people might have had too many beers on occasion and people generally in high school—I think all of us have probably done things we look back on in high school and regret or cringe a bit, but that’s not what we’re talking about.”

This self-portrait is at odds with the testimony of two women who have accused him of serious sexual misconduct in high school and as an undergraduate. It also doesn’t fit figure that emerges from other testimony and from contemporaneous documents like his high school yearbook.

A former roommate at Yale describes the undergraduate Kavanaugh as a “notably heavy drinker.” According to The New York Times, Kavanaugh’s yearbook provides a “glimpse of the elite Catholic school’s hard-drinking atmosphere—Judge Kavanaugh’s personal page boasts, ‘100 kegs or bust’—and a culture that some describe as disrespectful to women.”

In the yearbook, Kavanaugh describes himself as a “Renate Alumnius.” The Times explicates this odd phrase:

It is a reference to Renate Schroeder, then a student at a nearby Catholic girls’ school.

Two of Judge Kavanaugh’s classmates say the mentions of Renate were part of the football players’ unsubstantiated boasting about their conquests.

“They were very disrespectful, at least verbally, with Renate,” said Sean Hagan, a Georgetown Prep student at the time, referring to Judge Kavanaugh and his teammates. “I can’t express how disgusted I am with them, then and now.”

Kavanaugh denies any derogatory intent in those words and expressed regard for Renate Dolphin (as she is now known). According to Kavanaugh’s lawyer, “Judge Kavanaugh and Ms. Dolphin attended one high school event together and shared a brief kiss good night following that event.” Dolphin denies ever kissing Kavanaugh.

Ultimately, the persona that Kavanaugh created on Fox News is no more convincing than this attempt to explain away a crude and hurtful joke.