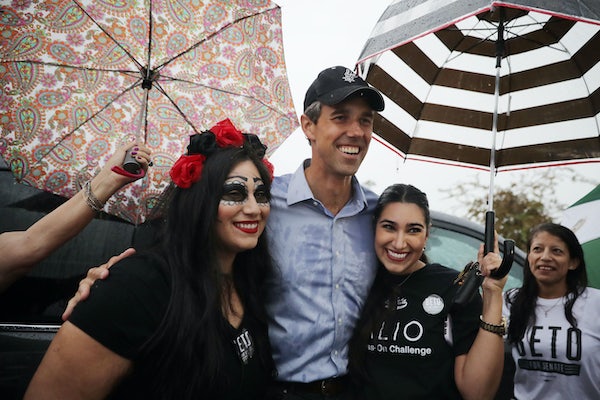 “It’s raining out, right? That’s Republican weather,” Bob Hugin, a New Jersey Republican running for U.S. Senate, said at a campaign event Monday. He hoped the bad weather would continue into Tuesday, discouraging Democrats from going to the polls. “God’s always looking out for us,” he said.

Hugin is getting what he wanted. As of early Tuesday morning, CNN reported, a “significant storm system” was forming over the middle of the country, which “could bring nasty weather to the Northeast, Midwest and South on Election Day.”

Some research does suggest that rain is Republican weather. A 2007 study found that “rain significantly reduces voter participation”—and decreased turnout tends to benefit Republicans. Another study published last year suggested that rain can actually affect voters’ moods. “When the weather is bad ... people tend to be more risk-averse,” the study’s co-author Yusaku Horiuchi told The New York Times. “When people become more risk-averse, people are more likely to be more conservative, and therefore they’re likely to vote for the Republicans instead of the Democrats.”

But Democrats have no reason to freak out. For one, the studies that show benefits for Republicans are not definitive. A 2016 study “disputed the finding of the 2007 study that rainfall benefits Republicans,” the The Dallas Morning News pointed out Monday. That study showed that bad weather on Election Day might actually benefit Democrats due to the rise in early voting and mail-in ballots, which Democrats are more likely to use.

In any case, all the research on how rainstorms affect Election Day show a relatively small impact. So if the political forecast calls for a Blue Wave, it will probably come, rain or shine.