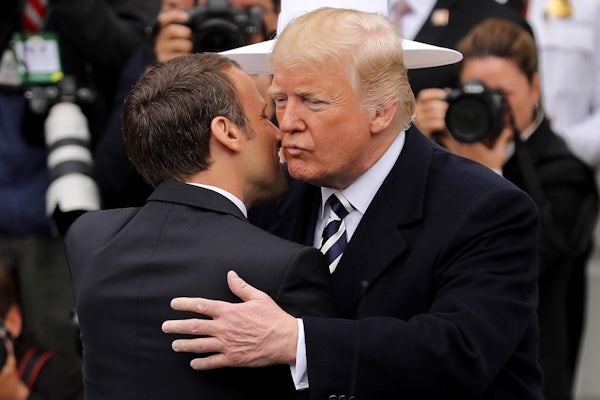 Trump is still smarting from his visit to France.

On Sunday, French President Emmanuel Macron delivered a World War I centenary speech that was widely seen as a rebuke to President Donald Trump’s America First nationalism. “Patriotism is the exact opposite of nationalism,” Macron said. “Nationalism is a betrayal of patriotism.”

Trump seems to still be bristling at Macron’s rebuke, because the American commander in chief spent Tuesday morning tweeting against Macron and France:

These tweets mix some familiar Trump themes, not all of which are without merit. It is true that France, like all countries, has its share of nationalism. And France does have protectionist practices. But saying that elides the distinction that Macron was trying to draw between patriotism (a form of national pride compatible with international cooperation) and nationalism (a more selfish and chauvinistic assertion of group self-regard).

In the first tweet, Trump seems to be suggesting that France should worry more about Germany than the United States, China, or Russia. Again, there’s a glimmer of truth here. Lord Hastings Lionel Ismay, NATO’s first Secretary General, famously quipped that the purpose of NATO was to “keep the Soviet Union out, the Americans in, and the Germans down.”

Still, the one of the main goals of French foreign policy since the Second World War has been reconciliation with Germany under a framework of alliances, such as the European Union and NATO. Trump’s tweet is a deliberate subversion of that goal, and echoes an age-old argument made by the Russian state (that the Europeans should fear Germany more than Russia).

The French government did not seem impressed by Trump’s tweets: