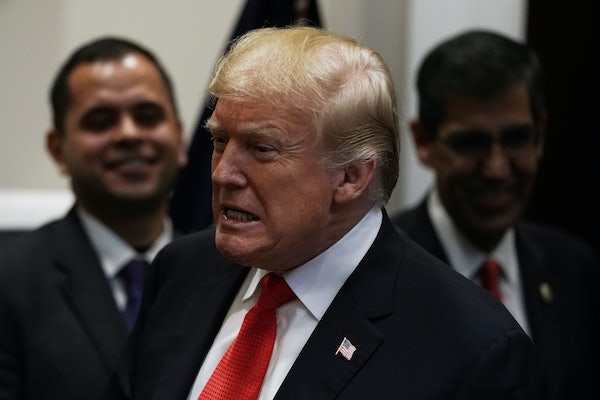 The president has a habit of saying whatever’s on his mind. To his supporters, it’s endearing, but it can also lead to awkward and potentially damaging confessions. The Daily Caller prompted one such moment on Wednesday when it asked Trump about acting Attorney General Matthew Whitaker and the future leadership of the Justice Department.

“Matthew Whitaker is a very respected man,” Trump answered. “He’s—and he’s, very importantly, he’s respected within DOJ. I heard he got a very good decision, I haven’t seen it.” He was referring to a 20-page opinion by the Justice Department’s Office of Legal Counsel that concluded that Whitaker’s appointment is legal. But then Trump, without any prompting, vented about special counsel Robert Mueller and the Russia investigation.

Well, I heard it was a very strong opinion. Uh, which is good. But [Whitaker] is just somebody that’s very respected.

It’s not exactly a secret that Trump wants to interfere in the Russia investigation. He made a similar admission to NBC’s Lester Holt after he fired FBI Director James Comey last year, and it’s well known that the president’s falling-out with Sessions could be traced back to his recusal from the inquiry. Placing Whitaker, a frequent critic of the investigation, atop the Justice Department wasn’t subtle, either.

Trump isn’t really trying to hide what he’s doing. Through either brazen self-confidence or the absence of self-discipline (or both), the president keeps admitting that he’s trying to hamstring an investigation into his own alleged misconduct. Trump isn’t the first president to obstruct justice, of course. But he might be the first one who doesn’t care than anybody knows it.