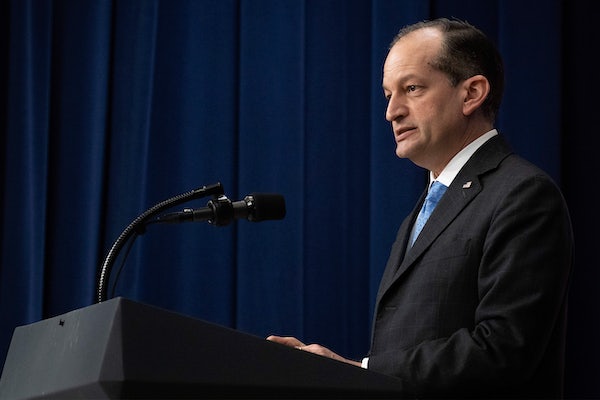 The Miami Herald has published an in-depth expose detailing how Acosta, as a prosecutor in Miami, allowed billionaire Jeffrey Epstein to go largely unpunished for sex crimes against minors. As the report notes, Epstein was “accused of assembling a large, cult-like network of underage girls—with the help of young female recruiters—to coerce into having sex acts behind the walls of his opulent waterfront mansion as often as three times a day, the Town of Palm Beach police found.” Epstein could have faced life in prison for these alleged crimes.

Instead, Acosta, the U.S. attorney handling the case, negotiated an “extraordinary plea agreement that would conceal the full extent of Epstein’s crimes and the number of people involved.” As The Miami Herald details, the non-prosecution agreement Acosta signed insured that Epstein would only serve 13 months in a county jail and “essentially shut down an ongoing FBI probe into whether there were more victims and other powerful people who took part in Epstein’s sex crimes.”

Acosta seems to have gone out of his way to accommodate the demands of Epstein’s legal team. “In email after email, Acosta and the lead federal prosecutor, A. Marie Villafaña, acquiesced to Epstein’s legal team’s demands, which often focused on ways to limit the scandal by shutting out his victims and the media, including suggesting that the charges be filed in Miami, instead of Palm Beach, where Epstein’s victims lived,” the article notes.

Esptein also surely benefited by having high-profile friends and acquaintances such as former president Bill Clinton, then businessman Donald Trump, and Prince Andrew.