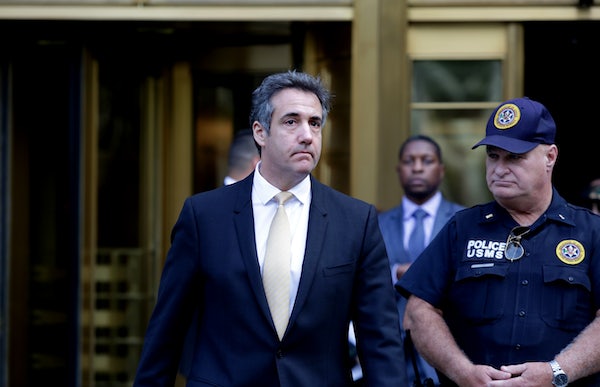 In the wake of Michael Cohen’s plea deal, Trump reiterates his code of loyalty.

In a press scrum on Thursday morning, President Donald Trump was asked about a plea deal made by his former lawyer Michael Cohen and special counsel Robert Mueller. As part of the deal, Cohen admitted to lying to Congress and also provided more details about contacts between Trump associates and the Russian government in 2016.

In response to these developments, Trump said Cohen is “a weak person. And by being weak, unlike other people that you watch, he’s a weak person, and what he’s trying to do is get a reduced sentence. So he is lying about a project everybody knew about.” The “other people that you watch” seems to be a reference to former Trump campaign head Paul Manafort, who had a plea agreement with the special counsel that ended when prosecutors decided he was lying to them.

Significantly, Trump held out the possibility he could pardon Manafort. “The question was asked yesterday about pardons with respect to Paul Manafort,” Trump said. “It’s very sad what’s happened to Paul, the way he’s being treated. I’ve never seen anyone treated so poorly...I’m not taking anything off the table.”

In distinguishing between Cohen and Manafort in this manner, Trump is laying out a loyalty code which equates cooperating with prosecutors with weakness and keeping silent with strength.

Trump also reiterated his desire to meet with Russian President Vladimir Putin in the forthcoming G20 meeting. Earlier, he had expressed the opinion that the meeting might not come about because of Russian aggression towards Ukraine. But now Trump said, “I probably will be meeting with President Putin. We haven’t terminated that meeting. I was thinking about it, but we haven’t. They’d like to have it. I think it’s a very good time to have the meeting.”

UPDATE: Shortly after Trump made these comments, Trump tweeted that he would not be meeting with Putin: