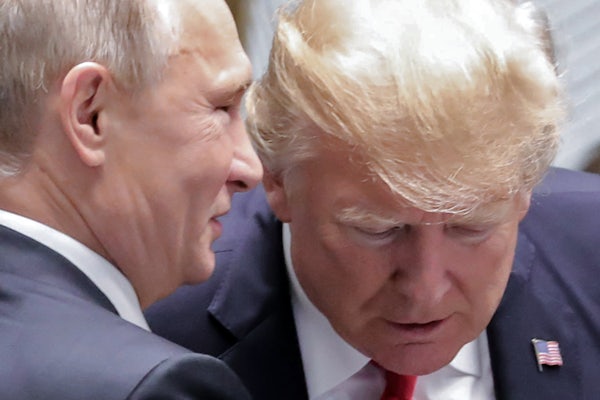 Trump Organization planned to give a $50 million gift to Vladimir Putin.

BuzzFeed has broken a story about the planned Trump Tower in Moscow that the president’s firm was pushing while he was running for president in 2016. Felix Sater, one of the leading Trump cronies spearheading the deal, devised a scheme to give the building’s penthouse, valued at $50 million, as a present to Russian President Vladimir Putin.

Michael Cohen, who was at the time the personal lawyer of then candidate Trump, signed on to the plan. The BuzzFeed revelation comes as Cohen has agreed to a plea bargain with special counsel Robert Mueller. Cohen now admits he lied to Congress when he testified that planned Russian business had been put on hold in January 2016.

In a press scrum on Thursday, hours before the BuzzFeed story broke, President Donald Trump said, “Michael Cohen is lying and he’s trying to get a reduced sentence for things that have nothing to do with me.” But Trump also added, with his typical commitment logic incoherence, that the Trump Organization was fully justified in pursuing business opportunities with the Russian government even in the midst of a political campaign. “There was a good chance that I wouldn’t have won in which case I would have gotten back into the business, and why should I lose lots of opportunities?” he asked.