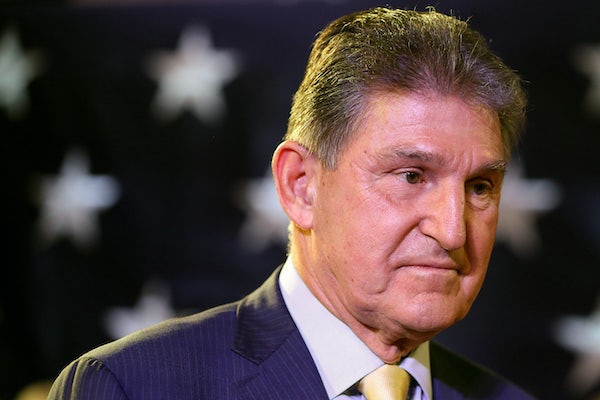 Joe Manchin is greenwashing himself.

In a surprise move on Wednesday, the Democratic senator from West Virginia said he would vote to oppose President Donald Trump’s nomination of Bernard McNamee for a spot on the Federal Energy Regulatory Commission, an independent panel of energy regulators. Manchin—who is notoriously pro-coal and supports some of Trump’s energy policies—had previously supported McNamee, a lawyer for the fossil fuel industry who has faced strong opposition from Democrats and environmentalists.

Manchin said he changed his mind on McNamee after viewing video footage of him denying the reality of human-caused climate change. “Climate change is real, humans have made a significant impact, and we have the responsibility and capability to address it urgently,” Manchin said in a statement. But there may be another motivation for his change of heart: Manchin is also seeking to be the top-ranking Democrat on a powerful energy committee in the next Congress, and progressives like Alexandria Ocasio-Cortez and Washington Governor Jay Islee have started to mobilize against him.

Manchin may acknowledge that climate change is human-caused, but he has long stood in the way of climate action. As Vox pointed out back in 2014, “Manchin has frequently voted to restrict the EPA’s authority to address climate change, and accused Obama of waging a ‘war on coal’—a favorite Republican talking point.” He has a 45 percent lifetime score from the League of Conservation Voters, and vocally supported Trump’s decision to withdraw from the Paris climate agreement. After Pope Francis released an encyclical on the need to fight climate change, Manchin responded with a statement about the importance of coal for America’s future. One statement in opposition to a climate denier—who is likely to be confirmed anyway—does little to change that reality.