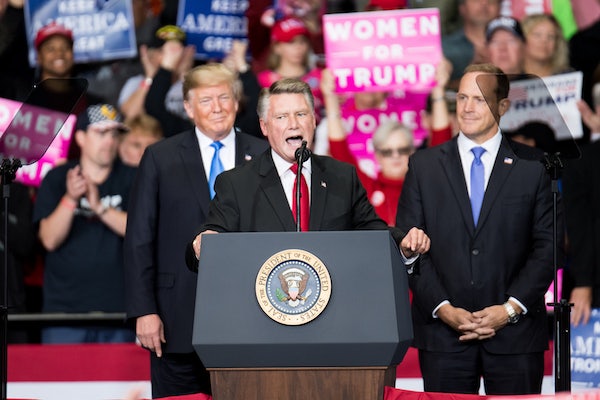 The New York Times is reporting that the campaign of Mark Harris, who ran for Congress as a Republican in a still unsettled race in North Carolina’s 9th district, has an outstanding debt to a consulting firm accused of illegally collecting, and possibly tampering with or misdirecting, absentee ballots. According to the newspaper, the Harris campaign “listed an obligation of $34,310 for ‘reimbursement payment for Bladen absentee, early voting poll workers; reimbursement door to door,” owed to the Red Dome Group. “Red Dome Group, in turn, contracted with L. McCrae Dowless Jr., a Bladen County political operative who has been accused of collecting absentee ballots from voters in a potentially illegal effort to tip the election toward the Republican nominee.”

This news intensifies doubts about the legitimacy of the election. On Thursday, Democratic candidate Dan McCready withdrew the concession he had previously made, saying in a statement, “I didn’t serve overseas in the Marines to come home to NC and watch a criminal, bankrolled by my opponent, take away people’s very right to vote. Today I withdraw my concession and call on Mark Harris to end his silence and tell us exactly what he knew, and when.”

In a setback for Harris, Republican leaders in the state have indicated they are open to holding a new election. If there is a new election, it would have the same slate of candidates unless one of them died or moved out of state. As Gerry Cohen, a former special counsel for the North Carolina General Assembly, explained to The New York Times, if Harris didn’t want to be on the ticket he could “move to Rock Hill, S.C. or to a country with no extradition treaty.”

Rich Lowry, editor of the conservative National Review, wrote in an opinion piece Friday that “Republicans won’t like it, but they should probably want to start over, for the sake of the integrity of their own nominating process, if nothing else.” But he also saw the story as evidence that Republican concern about voter fraud—an anxiety which Democrats tend to dismiss as cover for voter supression—is legitimate: “Rules should be rigorous, and it’s insane that the sort of vote harvesting that Dowless engaged in—i.e., a private party collecting the ballots of voters—is perfectly legal in California.”