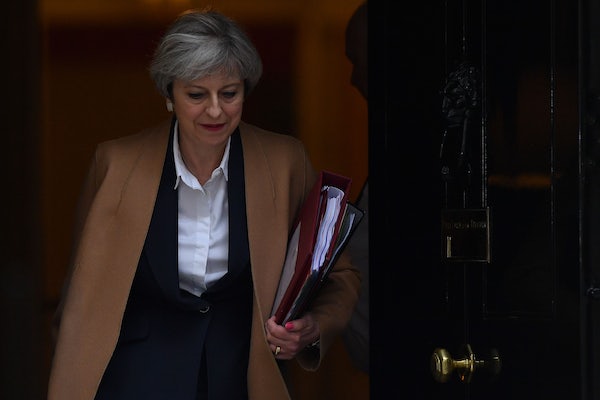 Theresa May admits she doesn’t have the votes for her Brexit deal.

On Monday, British Prime Minister Theresa May delayed the planned vote on the deal her government has negotiated for exiting the European Union, acknowledging that there wasn’t enough support in Parliament to push it through. The major stumbling block remains Northern Ireland, which wants its borders with Ireland (a member of the European Union) to remain open. The so-called “backstop” in Northern Ireland to ensure the open border is deeply unpopular with Brexit supporters. As Reuters notes, “May’s opponents say the backstop could leave Britain subject indefinitely to EU rules, long after it gives up say in drafting them.”

Addressing Parliament, May conceded that, “On one issue, the Northern Ireland backstop, there remains widespread and deep concern.”

Labour Party leader Jeremy Corbyn responded to the news by saying that “the government has decided Theresa May’s Brexit deal is so disastrous that it has taken the desperate step of delaying its own vote at the eleventh hour.”

Corbyn is not alone in seeing the news as a sign of a government in shambles. Analyzing the situation, Reuters concludes that “the move thrusts the United Kingdom’s divorce from the European Union into chaos, with possible options including a disorderly Brexit with no deal, another referendum on EU membership, or a last minute renegotiation of May’s deal.”