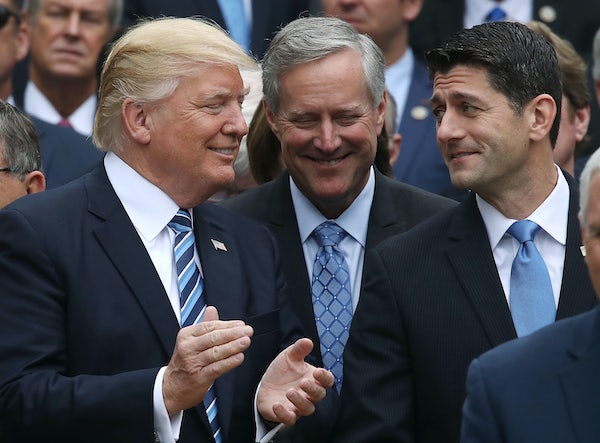 Looming government shutdown is the “last gasp” of the Freedom Caucus.

According to Politico, the driving cause of the looming partial government shutdown is the Freedom Caucus, a group of far-right Republicans in the House who convinced President Donald Trump to buck GOP leadership by taking a hardline position on funding the border wall.

On Thursday, Freedom Caucus Chairman Mark Meadows phoned the president. At that point, Trump was unhappy with the compromise Republican leaders had agreed to but was willing to go along with it, despite criticism from the right-wing media. “Meadows, who is close with the president and was recently in the running to be his next chief of staff, urged Trump to make a stand now before Democrats took the House in January — just as he had the night before and multiple times earlier in the week,” Politico reports. “Stick to your guns, the North Carolina Republican told the president, according to a source familiar with the conversation. We conservatives will have your back. And now is the last best chance to fight.”

The shutdown can be seen as the latest in a string of battles between the Freedom Caucus and GOP leaders that have hamstrung Washington over the last few years. These clashes have made it impossible to reach compromises on issues like immigration, and have hobbled the last two Republican House speakers, John Boehner and Paul Ryan.

Outgoing Republican Congressman Carlos Curbelo summed up the situation by telling Politico, “Our Freedom Caucus colleagues, they probably know that their relevance is going to be completely diminished next Congress, so this is kind of like a last gasp, but we know how this ends.” Politico itself sums up the situation thus: “House Republicans as of Thursday night were embracing the chaos.”