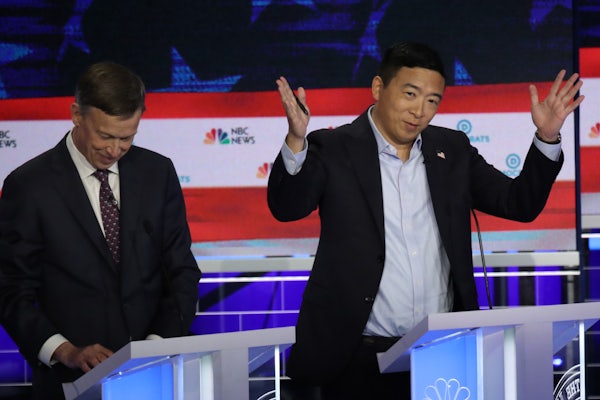 Andrew Yang is the most YOLO candidate ever.

Moderately successful businessman and “random opinionated person” Andrew Yang may have been the breakout star of Thursday night’s Democratic presidential debate—if only because of his proposal for a so-called “freedom dividend.” This is basically just Yang’s marketing term for a Universal Basic Income, under which every American adult receives $1,000 per month, or $12,000 per year.

This would solve a lot of our problems, Yang said—including climate change.

Would this actually work? Who knows! I mean, is it really the craziest thing in the world to think that if everyone had a little more financial cushion, more people would be OK with making some of the temporary financial sacrifices that will become necessary over the next 11 years to rapidly reduce our dependence on fossil fuels? If anything, it’s just as crazy as Joe Biden’s assertion that he can turn America’s entire vehicle fleet electric by the year 2030 without the help of Republicans. And hey, maybe if everyone had $12,000 more per year, they’d be willing to buy those electric cars. So, might as well try it, right? The human race only lives once, after all.