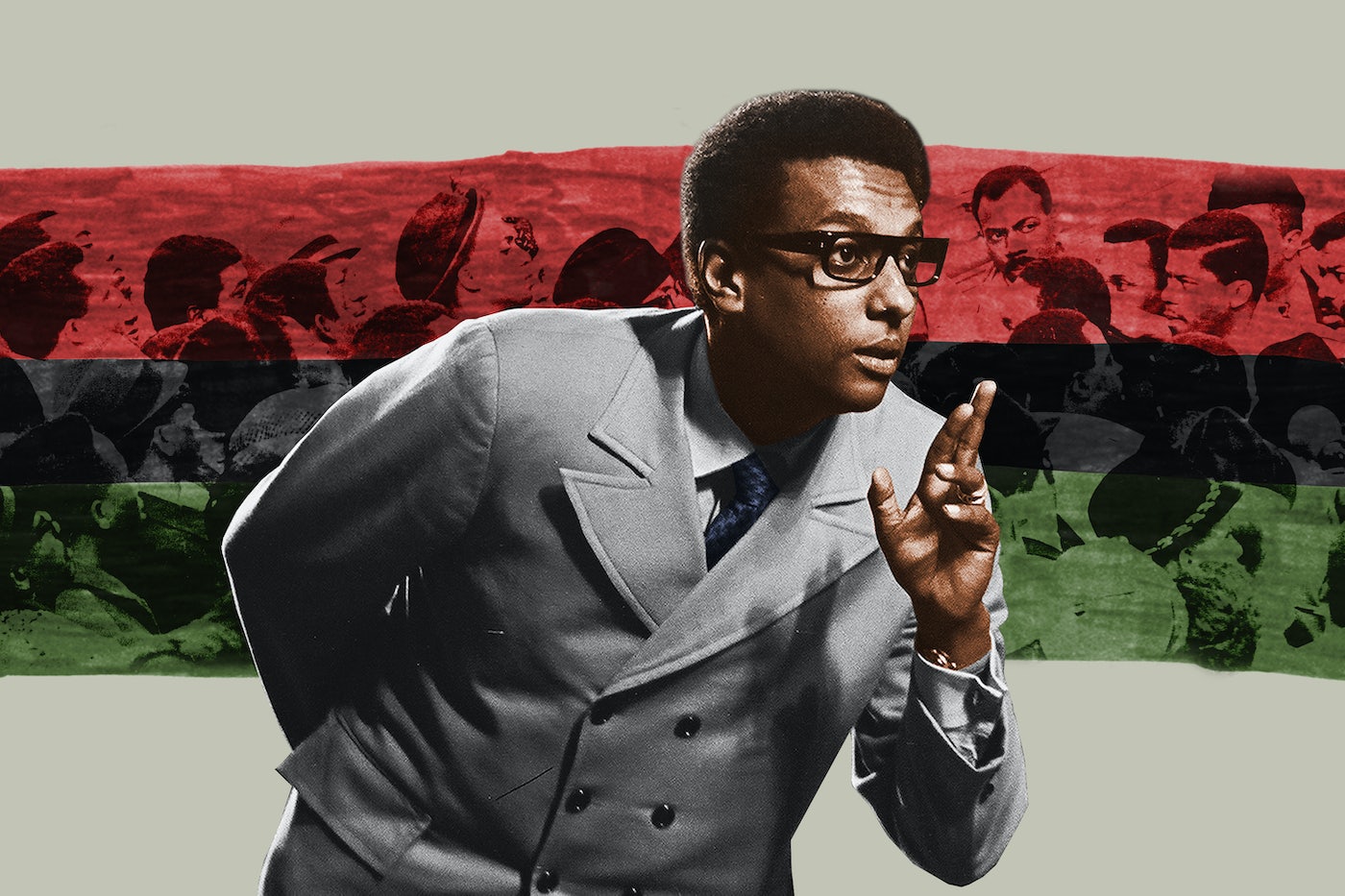 June 16, 1966, isn’t on the commemorative calendar in black American politics, but it probably should be. On that date, Willie Ricks, a Student Nonviolent Coordinating Committee (SNCC) field secretary, and Stokely Carmichael, SNCC’s new national chair, electrified the crowd in Greenwood, Mississippi, on the March Against Fear from Memphis to Jackson, Mississippi, when they began chanting “Black Power! Black Power!” The chant—and Carmichael’s speech before the gathering—sent shock waves through the news cycle. I remember that galvanizing moment very clearly; I was then a 19-year-old college student and felt a powerful rush from two snippets of the chant I heard in the press coverage of the moment when Black Power was born, as both a slogan and a movement. It seemed to offer, or augur, an exciting new brand of radicalism, and revolutionary confrontation, in the movement’s next phase.

For all that initial excitement, however, Black Power was always a concept in search of its object. It condensed a variety of frustrations and aspirations, both evanescent and concrete, and suggested, in adumbrated form, a path toward addressing them. So the following year, when Carmichael and political scientist Charles V. Hamilton published the nascent movement’s much-anticipated manifesto, Black Power: The Politics of Liberation in America, the effort to tease out an agenda for Black Power was likely to disappoint nearly every interested party. But the book was also underwhelming in a way that might have been instructive. Even though it was sprinkled with radical-sounding references to domestic colonialism and militant pronouncements purporting to expose the depth and overwhelming extent of American racism, the book alighted on a surprisingly conventional position. At bottom, it advanced, under a radical nameplate, the familiar pursuit of ethnic interest-group politics, of the sort that had shaped pluralist debate over a supposed politics of assimilation since Horace Kallen invented cultural pluralism in the early twentieth century.

“Black Power … is a call for black people in this country to unite, to recognize their heritage, to build a sense of community,” the authors averred. “It is a call for black people to begin to define their own goals, to lead their own organizations and to support those organizations.” But when they laid out the political strategy that followed from this declaration, it was little more than an affirmation of basic ethnic pluralism—“Traditionally, each new ethnic group in this society has found the route to social and political viability through the organization of its own institutions with which to represent its needs within the larger society…. Italians vote for Rubino over O’Brien; Irish for Murphy over Goldberg, etc.”—jazzed up with a race-reductionist account of the history and sources of black inequality. And their brief against American racism centered mostly on the psychological damage that they maintained it perpetrated on black people.

In other words, Carmichael and Hamilton based their purportedly revolutionary Black Power program on the two most problematic—historically inaccurate, racialist, and fundamentally conservative—frameworks that postwar American scholars and policymakers had adopted for interpreting inequality: ethnic succession theory and, with respect to blacks in particular, historian Daryl Michael Scott’s “damage thesis.” Both frameworks eschewed discussion of the role of political economy in favor of airy, group-based claims about culture as the basis for economic mobility and inequality in American life. The outlook conveyed in the particulars of the Black Power program stems in no small part from the political conditions that first gave rise to the movement. Black Power emerged at the moment when the great civil rights victories had been won and the institutional spine of the white supremacist regime had been broken. At that juncture, the broad movement for social justice launched a crucial debate over how best to build upon these foundational victories. In early 1965, longtime labor and civil rights activist Bayard Rustin laid out one vision. He questioned whether it made sense to continue describing the struggle for black equality as “the civil rights movement” in light of its recent landmark achievements. What had to happen after the successful battle for formal equality under the law, Rustin argued, was a move “beyond race relations to economic relations.” Progress toward substantive quality couldn’t happen, he insisted, “in the absence of radical programs for full employment, abolition of slums, the reconstruction of our educational system, new definitions of work and leisure. Adding up the cost of such programs, we can only conclude that we are talking about a refashioning of our political economy.”

Just three months after the movement launched, Rustin directly criticized the priorities of Black Power. He flatly debunked the ethnic group succession narrative as a just-so story that had no bearing on black experience or, for that matter, any other in the United States. He also stressed that the union movement and New Deal redistributive policies had been the main engines of upward mobility for all Americans, black as well as white. He invoked the $100 billion program that A. Philip Randolph was about to publish in A “Freedom Budget” for All Americans. This approach would be “aimed at the reconstruction of American society in the interests of greater social justice,” Rustin argued—and then charged that “the advocates of ‘black power’ have no such programs in mind; what they are in fact arguing for (perhaps unconsciously) is the creation of a new black establishment.”

Rustin’s class-based critique of Black Power went generally unnoticed and unrebutted at the time. As political scientists Cedric Johnson and Dean E. Robinson have shown, the Black Power sensibility grew partly from a left-inflected racial populist strain in insurgent black political discourse in the 1950s and early 1960s. The populist tendency’s internationalist, anti-colonial flourishes contributed to Black Power’s radical aura, proffering at least some emotional and symbolic connection to the revolutionary insurgencies occurring across what was then called the Third World. This radical aura made it easy to overlook or dismiss Rustin’s remark on the movement’s class composition.

Yet astute left voices in the Black Power camp had begun to sound alarm bells. Robert L. Allen’s Black Awakening in Capitalist America exposed highly suspect corporate connections and class dynamics within Black Power politics that subverted racial communitarian ideals of control by the “black community.” A politics resting on idealized goals like racial empowerment or community control could mean anything to anyone—until, that is, the agenda in question had to be specified as concrete policies, programs, and institutional arrangements.

As such critical details came to light over time, they served mostly to underscore the wisdom of Rustin’s pioneering class critique. The Black Power sensibility didn’t only appeal to college students and activists; it resonated also with the self-image and aspirations of an emergent stratum of black professional and managerial functionaries, administrators, and officials. By the middle 1970s, Rustin’s admonition had become fact, and the Black Power realignment of civil rights protest in the direction of sharply class-skewed ethnic politics remains the generally recognized baseline of black politics today.

Harold Cruse, the ex-Communist writer and black nationalist, was one of the movement’s few supporters to chastise the exuberant young militants for their failure to recognize their conservative nationalist ideological progenitors, such as the great apostle of black self-help Booker T. Washington. Cruse interpreted both Black Power and Bookerism as variations of the same basic theme in black politics, leading from racial uplift to community empowerment. Cruse, like Carmichael and Hamilton, had embraced a group-driven and ethnic-succession model of American political history, but insisted that the likely legacy of Black Power, like Bookerism before it, was to advance the blinkered and ultimately conservative goal of race advancement.

Bookerism arose at a moment when avenues for popular black political participation were brutally closed off via disfranchisement and imposition of a white supremacist order in the South. In that context, with support from Southern and Northern ruling-class interests, a stratum of educated and cultivated black men and women asserted themselves as spokespersons for a civically mute black population. They proceeded from that foundation to organize themselves as a class to seek what Kenneth W. Warren calls “managerial authority over the nation’s Negro problem” within limits set by the white ruling class.

By contrast, Black Power emerged at the moment when the victories of the mid-’60s raised questions concerning the centrality of a race-first orientation for black Americans’ political activity. Notwithstanding the movement’s militant posturing and denunciatory style, Black Power remained committed at its core to asserting the necessity of a race-reductionist, black ethnic politics. And this posture, in turn, worked to shore up the black professional-managerial class’s claim to managerial authority over an anti-politics of race relations rather than to the advancement of any substantive policy agenda. That remains the movement’s greatest legacy today.

Adolph Reed Jr. is professor emeritus of political science at the University of Pennsylvania.