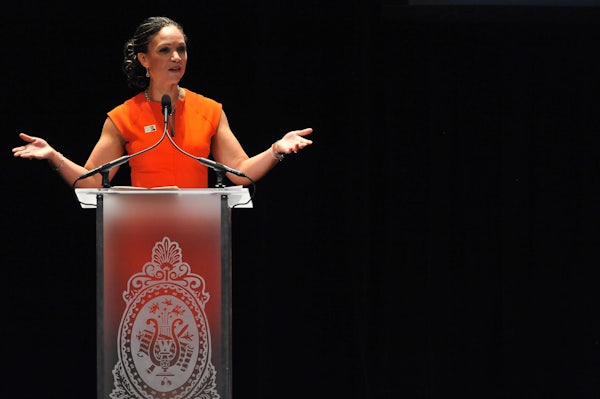 Melissa Harris-Perry writes about a chilling experience at the Iowa caucuses.

The MSNBC host and political science professor was in Iowa on caucus night along with her students from Wake Forest University, when she was approached and threatened by stranger at a Des Moines hotel. She described the encounter in a blog post on Tuesday, detailing a conversation that started off with hostile questions about her “credentials,” and that quickly escalated to something more alarming.

“I freeze. He speaks. And moves closer. Is there a knife under the coat? A gun? Worse? And I can’t hear all the words. But I catch ‘Nazi Germany’ and I catch ‘rise to power.’ But I can’t move. I am lulled by a familiar powerlessness, muteness, that comes powerfully and unexpectedly. It grips me. Everything is falling away.”

She credits her students, and not the disinterested hotel security staff, with helping her take control of the situation. Harris-Perry wrote, “I had little time to fret because moments later a dozen of my students came tumbling into the lobby ... literally bursting at the seams with stories of what they had seen and experienced in their caucus locations.” Once she and a friend began to jump up and draw attention to themselves, the man ran out of the lobby and drove off.

Despite Iowa’s reputation of civility, the campaign season there and in other early states has been punctuated by moments of violence. Harris-Perry’s experience demonstrates how quickly tensions surrounding gender and race can turn dangerous.