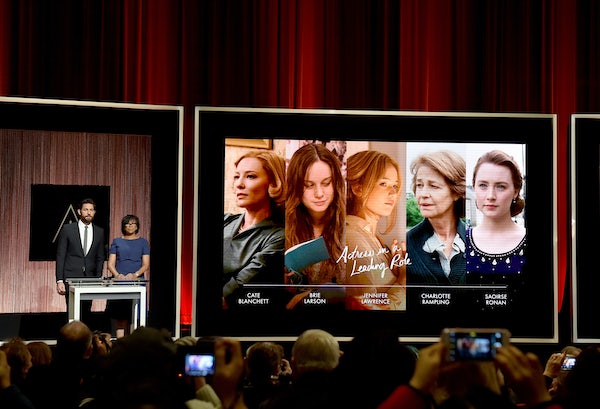 It’s hard out here for a white Oscar nominee.

At least that’s what The Hollywood Reporter editor Stephen Galloway argues in a tone-deaf column published this morning.

“Pity the plight of Oscar’s all-white acting nominees. Instead of celebrating, they’re entering a minefield where any comment can explode in their faces,” Galloway writes. (Galloway’s previous greatest hits include “Why Every Actress on The Hollywood Reporter Roundtable Cover Is White.”)

Apparently, the danger isn’t just that an actor might get negative publicity by saying something ignorant or racist, à la Charlotte Rampling. A nominee speaking out in sympathy with the #OscarsSoWhite protest risks losing the votes of resentful older white members angry about the Academy’s membership changes. (And if you want to see examples of those resentful older voters, read THR’s series of fascinating and disturbing guest columns by Academy members.)

So what’s a white actor who wants that gold statue to do? Back in 1996, when People magazine and Jesse Jackson protested the Oscars’ “Hollywood Blackout,” no white members of Hollywood were pushed to take a position.

But the column’s cynical argument—that nominees campaigning for an award need to balance currying the favor of racists with avoiding a p.r. disaster—should disabuse anyone of the notion that the Oscars are some kind of meritocracy.