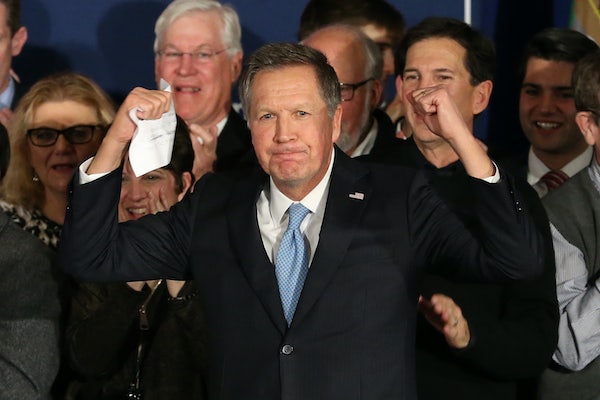 Kasich’s campaign has been putting out themed Snapchat filters since the fall, when they offered New Hampshire users a thrilling choice between one that showed each person’s share of the national debt and one that recreated Kasich’s logo in bacon. Today they launched a new one for people located near Greenville, S.C., the site of tonight’s CBS debate:

This is not a good advertisement for Kasich’s campaign. It lends itself too easily to jokes that Kasich’s first 100 days as president will be a sedate, law-abiding tootle below the speed limit. It’s not cool enough to appeal to young voters, and older voters don’t really use Snapchat anyways. The tonal imbalance suggests that whatever momentum Kasich had after his second place New Hampshire finish is already being squandered.

The stakes for Kasich tonight are especially high: Marco Rubio’s rapid decline following his terrible performance in the last debate has shown what a bad debate night can do to a surging campaign. A poll on Friday showed that Kasich has tripled his support in South Carolina to 9 percent, but the moderate opinions he has espoused during past debates are unlikely to play well in a deep red state like South Carolina. He needs a passionate performance tonight, not seatbelts.