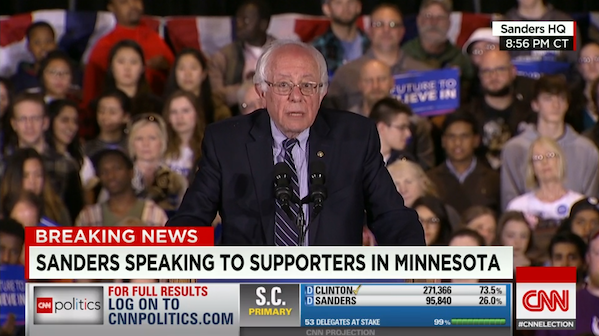 Bernie Sanders foregoes a concession speech for a rather morose campaign rally in Minnesota.

The Sanders campaign was en route to Rochester in Super Tuesday state Minnesota when the networks all called tonight’s South Carolina primary for Hillary Clinton. CNN reported that Sanders called Clinton to congratulate her even before the polls closed, and long after Clinton delivered her rousing victory speech, Sanders took the stage, not to deliver a concession, but hold a campaign rally.

The size of Clinton’s victory may have unsettled Team Sanders, because instead of his usually fiery demeanor, Sanders appeared rather downtrodden while railing against corporate creed and Wall Street corruption. He unloaded his usual arsenal of attacks against Clinton—paid speeches, Wall Street dollars, etc.—with little enthusiasm, and CNN cut away before he could finish his remarks. Fox News and MSNBC also both stuck with their original schedules instead of airing Sanders’ speech.

Minnesota is a crucial state for Sanders on Super Tuesday. Clinton is expected to do well in states with significant minority populations, so states like Minnesota, where the electorate is disproportionately white, represent the best bet for Sanders to pick up crucial delegates.