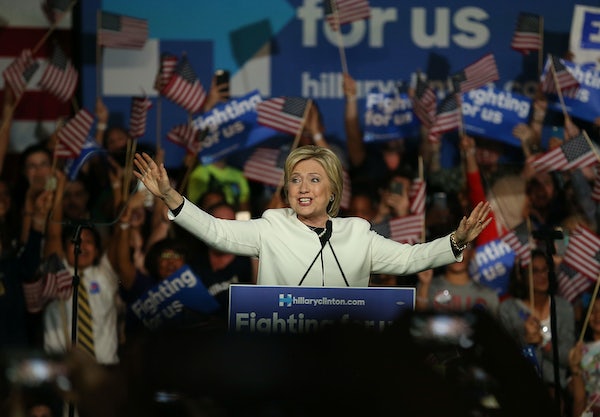 After winning six states—Virginia, Tennessee, Georgia, Alabama, Arkansas, and Texas—Clinton looked positively joyous standing in front of a diverse crowd of supporters. Rather than attacking her opponent, her speech focused on togetherness and breaking down barriers—a shot at the divisiveness that has characterized the Republican race. “We have to make strong the broken places,” she said. “Instead of building walls we’re going to break down barriers and build ladders of opportunity and empowerment so every American can live up to his or her potential because then and only then can America live up to its full potential too.”

As expected, Clinton swept the Southern states tonight, and her speech beamed confidence that she will be the Democratic nominee. She received large cheers from supporters when she spoke of equal pay for women and President Obama’s expected nomination of a “strong, progressive” Supreme Court justice. “It’s clear tonight that the stakes in this election have never been higher and the rhetoric we’re hearing on the other side has never been lower,” she said. “We’re all in this together.”