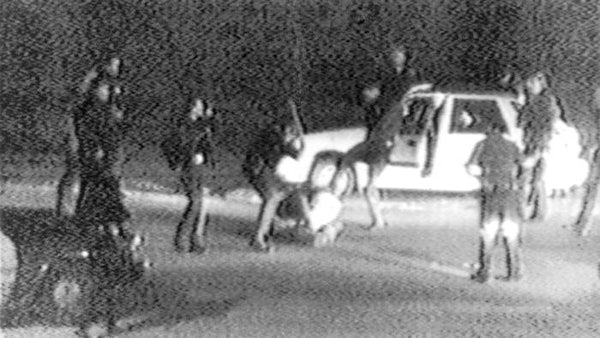 25 years after Rodney King, are we numb to videos of police violence?

The home video that captured LAPD officers bludgeoning an unarmed black motorist on March 3, 1991, shocked the country. The man who taped it, George Holliday, heard sirens from his suburban balcony, turned on his new Sony camcorder, and caught 81 seconds of brutal kicking and clubbing on tape.

But while the video sparked public outrage, criminal charges against the officers, and riots when those officers were acquitted, how much did it actually accomplish? In part, it provided a way for defense lawyers to justify the violence based on racial stereotypes—stereotypes that the jury bought into. As Barry Scheck wrote in the New Republic after the trial:

The racial imagery was plain. King was an unusually large man. He did not seem to respond to the electronic shock of the teaser gun, or an electronic harpoon shot. He acted like he was on PCP. He was dangerous. Somehow, the racial barrier prevented this jury from seeing a human being under the baton blows.

Video evidence of police brutality can lead to police reform. It can spark movements. But it can also reinforce another motif: that large black men, the subjects of these videos, deserve what they get. As Jamil Smith asked in the New Republic after police shot and killed Walter Scott last spring, “What act, or accompanying footage, will be required for the powers that be to finally see what’s going on?”