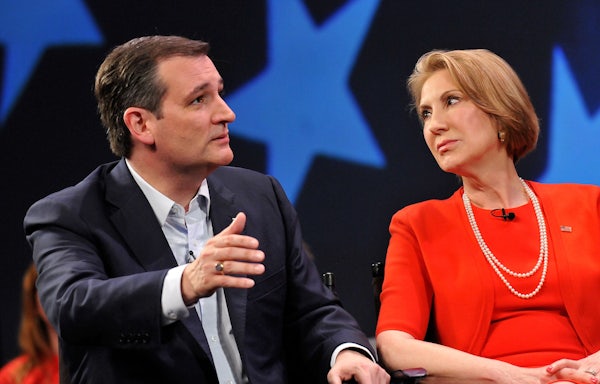 Ted Cruz named Carly Fiorina his running mate last Wednesday, in the hopes that she would help him catch GOP frontrunner Donald Trump. Less than a week later, Cruz dropped out of the race, putting a very abrupt end to Fiorina’s vice presidential candidacy. Here are all six days of her second campaign of 2016, ranked from worst to best.

On Monday, Fiorina was on stage at a campaign event in Indiana until, suddenly, she wasn’t. After introducing Cruz as the next president of the United States, Fiorina pumped up the crowd, turned, and fell off the stage. Cruz barely seemed to notice.

The Daily Show picked up on Fiorina’s curious decision to sing on stage during a campaign rally, while Stephen Colbert savaged Fiorina over her business record.

Fiorina had one last opportunity to rethink her decision to accept Cruz’s offer, say she made a big mistake, and run for the hills. But on Thursday, the campaign released their first ad staring Fiorina, in which she is forced to repeat Cruz’s corny campaign puns.

No news was good news for Fiorina.

Thanking Fiorina as a “phenomenal running mate,” Cruz announced he was suspending his campaign. Carly was thus freed from having to spend any more time stumping for a man whom everyone hates.