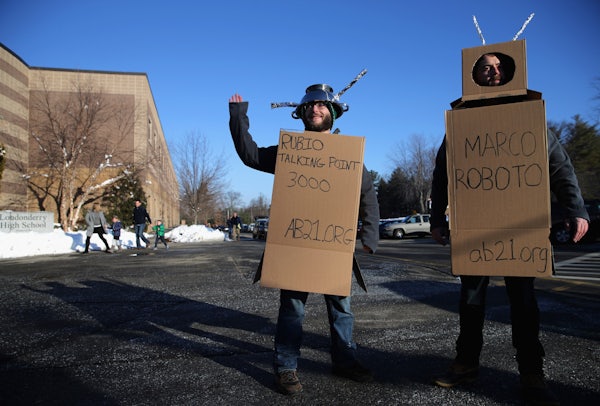 Marco Rubio is not done dispelling with fictions or running for office.

Last year, Rubio said he would be giving up his Senate seat—where he barely did any work anyway—to run for president. That didn’t turn out so hot for Rubio, whose campaign more or less ended when Chris Christie turned him into a short-circuiting mess on the debate stage in New Hampshire.

Should Donald Trump lose, everyone expects Rubio to run for president in 2020. The question was what Rubio would do in the intervening period. Most people assumed that Rubio, who is not particularly wealthy by politician standards (he finished paying off his student loans last year), would enter the private sector and amass a small fortune. But there have been signs over recent weeks that Rubio is having doubts about exiting politics.

Somewhat absurdly, the massacre at an Orlando gay nightclub reminded Rubio, who opposes both gun control and gay rights, of his call to serve. And, despite the fact that his “friend” is running for his seat in the Senate, it seems like Rubio is going to throw his hat back in the race. Appearing on CNN on Friday morning, Florida Rep. David Jolly, who was running for the Senate, said that Rubio is running for reelection and that he would file the paperwork this afternoon. Jolly then dropped out of the race himself.

Marco Rubio will not cease dispelling with fictions until there are no more fictions to dispel.