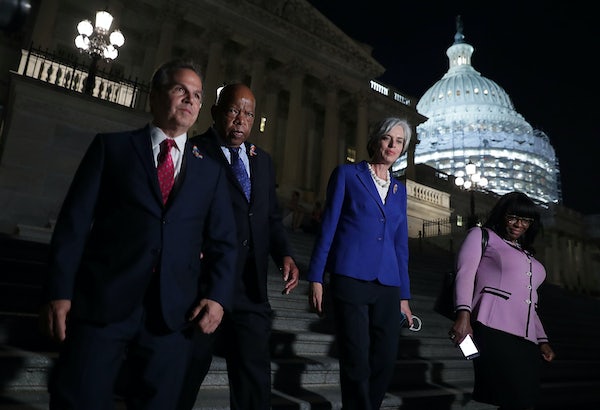 Would it make a difference if the Democrats were fighting for a gun control bill that didn’t suck?

You may have heard that the Democrats in Congress are staging a sit-in to demand gun control legislation. It’s simultaneously a powerful protest and a clever get-out-the-vote maneuver. The Democrats know that their bill won’t pass and they’re milking it for maximum political capital: The sit-in is enraging voters who, the thinking goes, will turn out in November to demand the kind of legislation that was thwarted by the Republican-controlled Congress.

But there’s a problem! The doomed bill that the Democrats are losing all this sleep over actually sucks a lot if you care even an iota about reducing gun violence. The two amendments being voted on would expand the background check system and prevent anyone on the FBI’s terrorist watchlist from buying a firearm. Universal background checks are a small step in the right direction, but the terrorist watchlist is an imperfect (to say the least) and illegal tool that is very bad at identifying potential terrorists and very good at making the lives of Muslim Americans hell.

Moreover, by limiting themselves to wedge issues that wouldn’t really move the needle in lessening gun violence, the Democrats are limiting their negotiating position. Standing up and saying, “Republicans won’t even pass these minor fixes that actually sound like things Republicans would pass, because they don’t affect white people’s ability to purchase weapons” is a potentially winning line, but it’s not being used. Instead, this is being pushed as real gun control, which it isn’t. And that means that, should the Democrats miraculously find themselves in a position to push for real gun control, they might be constrained by these bad amendments.

Just as importantly, if the purpose of this sit-in is educational, rather than legislative (which it is), then it matters if the amendments you’re pushing for don’t actually do anything: The Democrats are not only losing a great opportunity to educate the public about what meaningful gun control would look like, they’re actively misleading it by claiming that “No Fly, No Buy” would put a dent in the epidemic of gun violence.