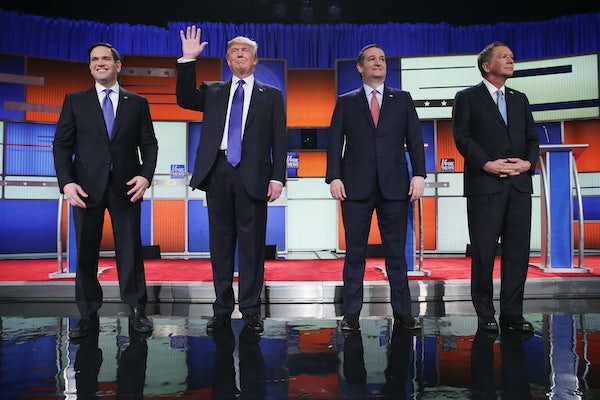 Day three of the RNC is all about the losers.

Remember them? Ted Cruz and Marco Rubio will be speaking at the convention today, along with Governor Scott Walker (whose presidential run lasted all of two months). Appropriately, the theme is “Making America First Again,” which refers to the United States’s position in the world, but also to how Trump is first, because he beat all these losers.

Rubio, who has had significant trouble deciding whether to attend the convention at all, won’t actually be showing up in person, since he’s busy running for re-election. Instead he will be projected on a video screen. Ted Cruz, Trump’s greatest adversary in the primaries, will be there in the flesh, but has not yet endorsed his former competitor. In an interview with Politico, Cruz was vague about the contents of his speech, but it doesn’t seem like any great commendations will be coming Trump’s way—more likely, Cruz will focus on bashing Hillary Clinton and not so subtly promoting Cruz 2020.

Other notables in the lineup include VP pick Mike Pence, who might finally get a chance to speak for himself; radio host Laura Ingraham, who was last seen declaring that she would rather crap herself than share a bathroom with a transgender person; rejected veep pick Newt Gingrich; fracking mogul Harold Hamm; and Eric Trump, who is hastily crossing out Alanis Morissette lyrics after running his speech through Turnitin.