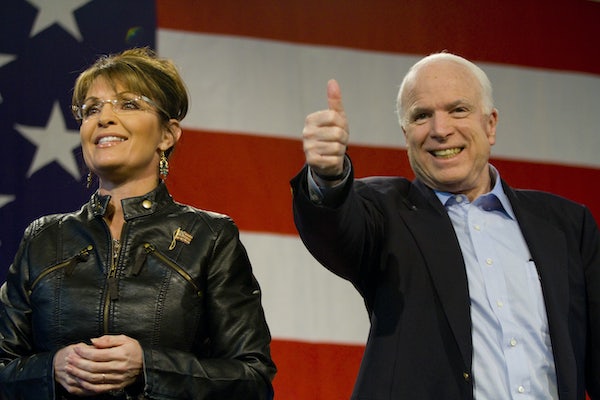 John McCain: Vote Republican if you want a legitimation crisis or the end of the filibuster, plus more Trumps.

Speaking on behalf of Pennsylvania Senator Pat Toomey, who is losing badly, McCain, who is pretty safely ahead in his own race, told a talk radio host in Philadelphia that Senate Republicans would mount an unprecedented campaign of obstruction against Hillary Clinton’s Supreme Court nominees.

“I promise you that we will be united against any Supreme Court nominee that Hillary Clinton, if she were president, would put up,” McCain said. “I promise you. This is where we need the majority and Pat Toomey is probably as articulate and effective on the floor of the Senate as anyone I have encountered.”

The implications of this promise differ depending on partisan control of the Senate. If Republicans hang on to a narrow majority, McCain is proposing a new norm in which Supreme Court justices are never confirmed during periods of divided government, precipitating a full blown legitimation crisis. If Democrats win back the majority, he is suggesting Republicans will filibuster Clinton’s Supreme Court nominees—an action that would almost certainly herald the end of the filibuster for Supreme Court nominees and perhaps the end of the filibuster altogether.

It’s also possible that McCain was peddling some desperation-driven b.s. and the Senate will confirm Clinton’s nominees easily over his and Toomey’s objections. They can’t speak for all of their colleagues. But even if that’s the case, McCain is demonstrating how hard old habits die. Donald Trump is in large part the product of the Republican Party’s pandering to a shrinking base with ever-more unrealistic, maximalist promises. One way to ensure more Trumps will eventually emerge is to promise not to allow the Supreme Court to change its ideological tilt in response to an election, and then fail to follow through.