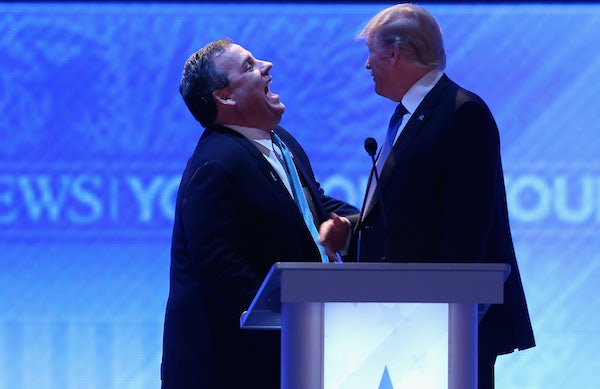 Chris Christie has shifted from being Trump’s man servant to being his whipping boy.

Once upon a time, Christie—the first Republican presidential candidate to endorse Trump—thought he was headed towards a plum cabinet appointment. Attorney General Chris Christie. Secretary of State Chris Christie. Vice President Chris Christie! By endorsing Trump he had turned lemons—in this case, Bridgegate and crushing unpopularity in his home state—into lemonade. But then he was outmaneuvered by Jared “Count of Monte Cristo Jr.” Kushner and was betrayed: First subjected to a number of humiliations by Trump that were subsequently leaked to the press, then exiled back to New Jersey, where he may or may not serve out his final year in office.

But Christie still held out hope. A week ago, Politico reported that Christie liked the way things were shaping up. “I think he’s one who feels that there will be a good amount of turnover and so Trump will be looking for a range of different people and talents as time goes on,” a New Jersey Republican said.

But, alas, Christie’s hopes appear to have been dashed again. The Trump transition is going very poorly and its leaders are blaming Christie, who was shitcanned as transition leader shortly after Trump won the presidency. Per Axios Presented by Bank of America:

Trump’s advisers tell us privately that many parts of the operation remain messy — in large part, they say, because New Jersey Gov. Chris Christie left them with virtually no preparation for a transition. Advisers told us horror stories of struggles to fill key roles — including getting handed files of candidates, most of whom were Democrats. This is only adding to the confusion and slowed policy-making discussions.

As badly as things have gone for Trump, he’s always had Chris Christie to blame. That may ultimately be Christie’s saving grace. Eventually, Trump may need to bring him back into his orbit, if only to use as a scapegoat.