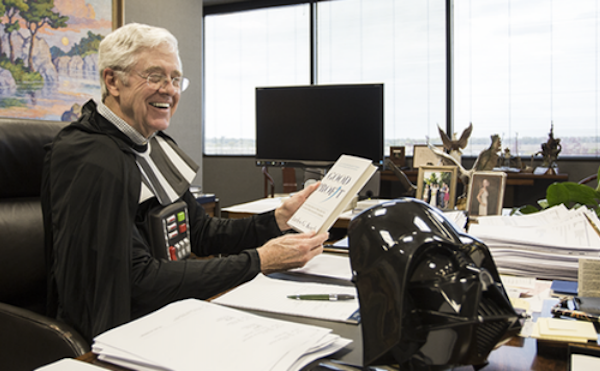 The Kochs helped get us into this mess. Don’t let them off the hook.

Trump’s presidency was pitched to Republicans, conservatives, and libertarians as one in which everyone would win. Trump’s base would get The Wall, conservatives would get a Supreme Court justice with an ideology rooted in the early 19th century, and libertarians would get the biggest tax cuts and regulatory repeals since Ronald Reagan. But ten days into Trump’s presidency, the honeymoon period seems to already be over, with a number of factions in the Republican coalition unnerved by Trump’s insecure outbursts and his attention-grabbing and civil liberties-eroding policies, most notably his restriction on travel from seven Muslim-majority countries.

Trump and the Kochs have never really seen eye to eye—as recently as a month ago, Trump booted David Koch off of his golf course for inviting Harry Hurt, who wrote a salacious biography of Trump over two decades ago. Trump’s cabinet nevertheless looked like it could have been hand-picked by the Kochs—it is made up of a number of their allies, most notably Mike Pompeo and Betsy DeVos. But at the Koch network’s annual summit, which took place over the weekend, Charles Koch spoke out against the Muslim ban, saying, “We have a tremendous danger because we can go the authoritarian route ... or we can move toward a free and open society.”

The Kochs may be tempting allies for some in the #resistance. They are not only deep-pocketed, but also  prove that opposition to Trump’s low-rent authoritarianism is bipartisan. Perhaps most enticingly, they have relationships with a number of lawmakers and could lean on their allies to oppose Trump. The Democrats in the Senate, after all, only need a handful of Republicans to fight Trump legislatively.

But the Kochs are an enemy of everything that the opposition to Trump should stand for. For four decades, they have poured hundreds of millions of dollars into eroding democratic norms, redistributing wealth from the bottom to the very, very top, and destroying a regulatory framework and social safety net that protects workers and families from environmental destruction and extreme poverty. They have been pushing for a plutocratic government for years—one that will reward a handful of billionaires while punishing everyone else. In Trump, they are reaping exactly what they have sown—they should be held accountable for that, not given a plum spot in the resistance.