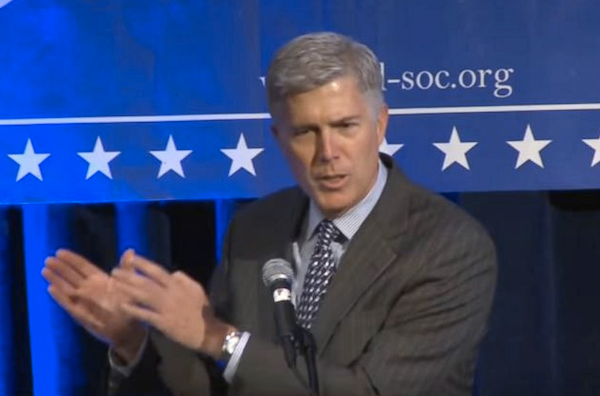 Trump’s SCOTUS nominee was always going to be branded as the heir to Antonin Scalia.

Unless it was Merrick Garland, that is. (It wasn’t.)

The National Review’s Ramesh Ponnuru was not the first person to report that Neil Gorusch, who currently serves on the Tenth Circuit Court of Appeals, would be selected by Donald Trump to fill Scalia’s seat, which has been vacant for nearly a year. But he was the first to pick up on the narrative that will define Gorusch as he moves through the confirmation process. (Or doesn’t.) Here’s Ponnuru’s lede:

President Trump’s nominee to the Supreme Court will be Neil Gorsuch, a well-respected conservative whose legal philosophy is remarkably similar to that of Antonin Scalia, the justice he will replace if the Senate confirms him. He is, like Scalia, a textualist and an originalist: someone who interprets legal provisions as their words were originally understood.

There is, to be fair, a lot to earn the comparison! Gorusch has a sparkling prose style and an active and idiosyncratic legal mind, which occasionally leads to unexpected places. He seems, particularly where federal agencies are concerned, to be more conservative than Scalia. He also seems to be more likely to rule against the government in cases involving religious freedom than Scalia was, which should also concern liberals. That said, Gorusch’s idiosyncricies make him hard to pin down when placed into two-party political context, something that likely endeared him to Trump. (He is certainly less controversial than William Pryor, who was favored by Jeff Sessions, and slightly less controversial than Thomas Hardimann, who was the pick of Trump’s sister, federal judge Maryanne Barry.)

There’s some debate about Gorusch’s views on Roe v. Wade. Phyllis Schlafly’s son thinks that he “would not be pro-life,” but he sided with Utah when it defunded Planned Parenthood and has argued that there is no constitutional basis to protect the life of a mother over that of a child. (Originalism!)

But despite the surface similarities, the Scalia comparisons were inevitable for political reasons. First, Scalia was a Supreme Court justice who held and normalized extreme judicial views while on the bench—pointing to him as a model Supreme Court justice works to push through very conservative candidates. And second, by defining it as Antonin Scalia’s seat—and not, say, Merrick Garland’s—Republicans are trying to undercut the valid arguments made by Democrats that they were robbed of a seat that belonged to them. It’s only fitting that an heir to Anton Scalia sit in his chair, after all.