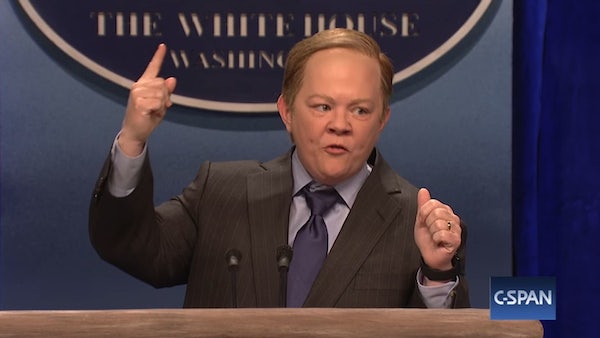 The White House is very good at telling the public how to make Trump extremely mad.

Whether through incompetence or malevolence or (more likely) a toxic mix of the two, the administration’s first two weeks have been defined by a flurry of fuck-ups. They have screwed up the rollout of (horrifying) executive orders, relations with countries like Australia, and basic facts about American history and democracy. Trump’s team so far has shown aptitude at only one thing: leaking to the media.

To be fair, leaks may be the only reliable way to reach Trump, who does not use email. If you don’t have the number for his unsecured Android phone, then you have no other choice than to leak something that will get covered on Morning Joe or spoofed on Saturday Night Live. And if you really do things right, your leaks will get spoofed on SNL and then covered on Morning Joe, which will lead to Trump angrily tweeting about how he is a big boy very early in the morning.

For example, SNL’s cold open this weekend reflected the widely held belief that Steve Bannon—a self-described Thomas Cromwell—is the real power behind the throne. That skit, in turn, was based on Bannon’s Time magazine cover, which reportedly made Trump insanely jealous, because he’s the only person who reads Time outside of a dentist’s waiting room. This led him to tweet one of the funniest things ever on Monday:

But the biggest recipient of Trump’s ire seems to be his very agitated Press Secretary Sean Spicer, who can’t do anything right. His suits suck. When Trump tells him to be mean to the press, he is sometimes too mean. And Trump was apparently so furious after Melissa McCarthy spoofed Spicer on SNL that he didn’t even tweet. “More than being lampooned as a press secretary who makes up facts, it was Spicer’s portrayal by a woman that was most problematic in the president’s eyes, according to sources close to him,” Politico reported. “Trump doesn’t like his people to look weak,” one donor added.

Hoo boy! This largely tracks with other instances of Trump’s misogyny—he reportedly also tells female aides to “dress like women,” meaning no pant suits. But like the President Bannon meme, these leaks also tell people exactly how to get under Trump’s skin. Trump enemy number one Rosie O’Donnell is already gearing up to play President Bannon.