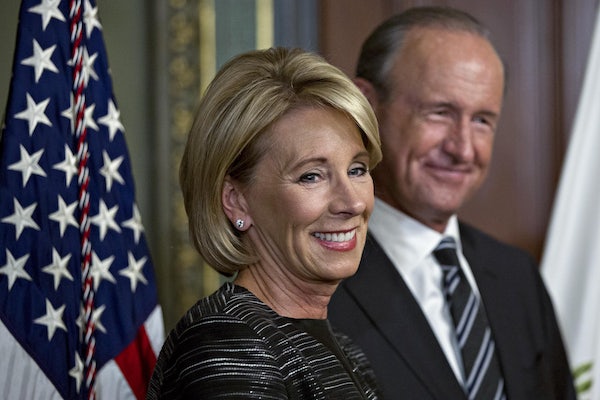 In her first public appearance as President Donald Trump’s education secretary, DeVos made a joke to department staff about her contentious confirmation process. It was “a bit of a bear,” she said on Wednesday, referring to her much-mocked comment about schools having guns to protect students from grizzlies.

DeVos has a lot of tension to diffuse. Her hostility to public education and unfamiliarity with education policy inspired massive backlash from parents, students, and teachers, prompting every Democratic senator and two of their Republican colleagues to oppose her nomination. “I know I’m the newbie and I have a lot to learn,” she told her audience at the Education Department. “I hope to earn your trust and confidence as we work together.”

DeVos said she’s “a door-open type of person” who’s “committed to working with anyone” in the service of students. She promised to challenge “why we’ve done things a certain way,” but also to collaborate with career professionals. And she made no mention of her controversial policy priorities.

DeVos did make a passing reference to the interests of adults getting in the way of student concerns—rhetoric that’s often used to demonize teachers unions—but the speech seemed designed as a reset. She needs one, too, since her entire agenda may already be in jeopardy.