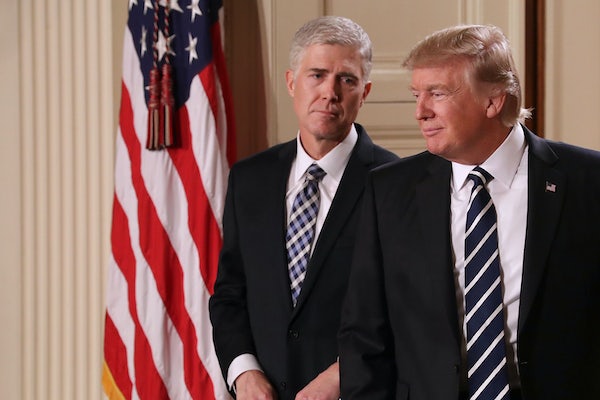 Trump’s attacks on the judicial branch—and his seeming ignorance of the separation of powers—have already colored Gorsuch’s nomination to the Supreme Court. Shortly after Trump blasted the Washington judge who stopped his Muslim ban as a “so-called judge” who will bear responsibility for any terror attacks that occur, Democratic senators made it clear that Gorsuch will have to pledge to be a check on Trump during his confirmation hearings. “With each action testing the Constitution, and each personal attack on a judge, President Trump raises the bar even higher for Judge Gorsuch’s nomination to serve on the Supreme Court,” Chuck Schumer said in a statement. “His ability to be an independent check will be front and center throughout the confirmation process.”

Gorsuch has begun meeting with senators from both parties. At his meeting with Senator Richard Blumenthal, a Democrat who has been all over the place with regard to the Supreme Court vacancy, Gorsuch reportedly assured Blumenthal that he did not find Trump’s attacks on judges to be appropriate—a spokesman for Blumenthal said that he described them as “disheartening” and “demoralizing.”

The easiest explanation here is that Gorsuch, who needs eight Democrats to vote for him to be confirmed, was simply trying to reassure Blumenthal that he did not share Trump’s authoritarianism. But Trump is enormously sensitive to dissent—though he may be getting used to it—and this kind of statement, which plays into the hands of his opponents, has made him blow his top in the past. Democrats were always going to use the Muslim ban as a wedge at Gorsuch’s hearings—but based on Gorsuch’s statement, it might damage his relationship with Trump before they even begin.