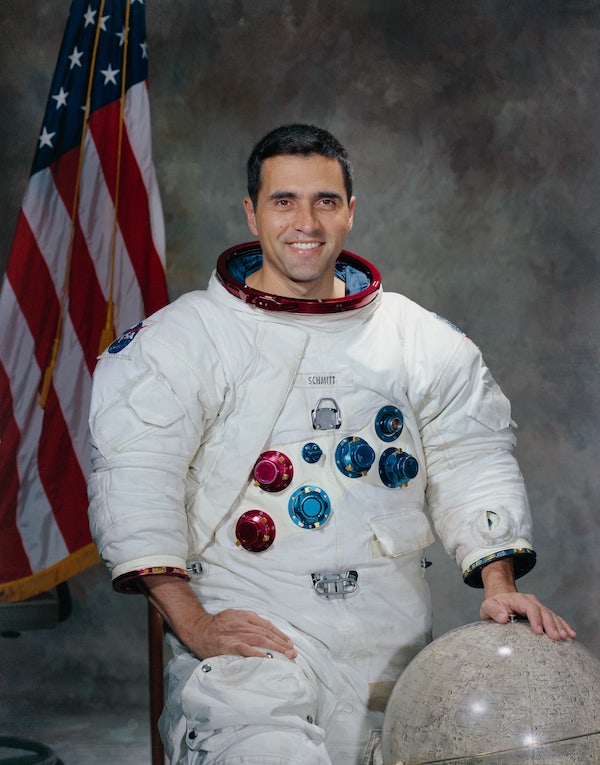 The first hearing on NASA’s future will feature a climate-denying astronaut.

Harrison Schmitt is one of the only 12 humans to have ever walked on the surface of the moon. He’s also a climate change denier, and the first listed witness for the House Science Committee’s Thursday hearing on “NASA: Past, Present, and Future”—our first glimpse of what NASA’s mission will look like under full Republican rule.

The Trump administration has been relatively mum about its plans for America’s space science agency, but a senior campaign advisor told The Guardian in November that Trump would like to eliminate NASA’s world-renowned climate change research division. Schmitt, a geologist, would almost certainly be in support of that plan. The Apollo 17 astronaut has spent a good deal of his post-space career speaking out about the “red herring” of carbon emissions. He’s also repeatedly asserted a link between Soviet Communism and environmentalism.

In this 17-minute presentation, he refers to mainstream climate scientists as “alarmists” and claims that most scientists are pushing for “national socialist control of economies.”

This type of witness is not particularly surprising for the House Science Committee, which has become somewhat of a hub for climate change contrarians since chairman Lamar Smith took over in 2013. In its hearings, the committee also has increasingly favored industry witnesses—lawyers, lobbyists, and other non-scientists—over scientists, according to a recent analysis by the Environmental Integrity Project.

Still, it could be that Thursday’s hearing avoids questions of NASA’s climate research altogether and focuses chiefly on space exploration. The other three witnesses are not particularly outspoken on climate. Considering the committee’s history of misinformation on the topic, silence may indeed be the best policy.